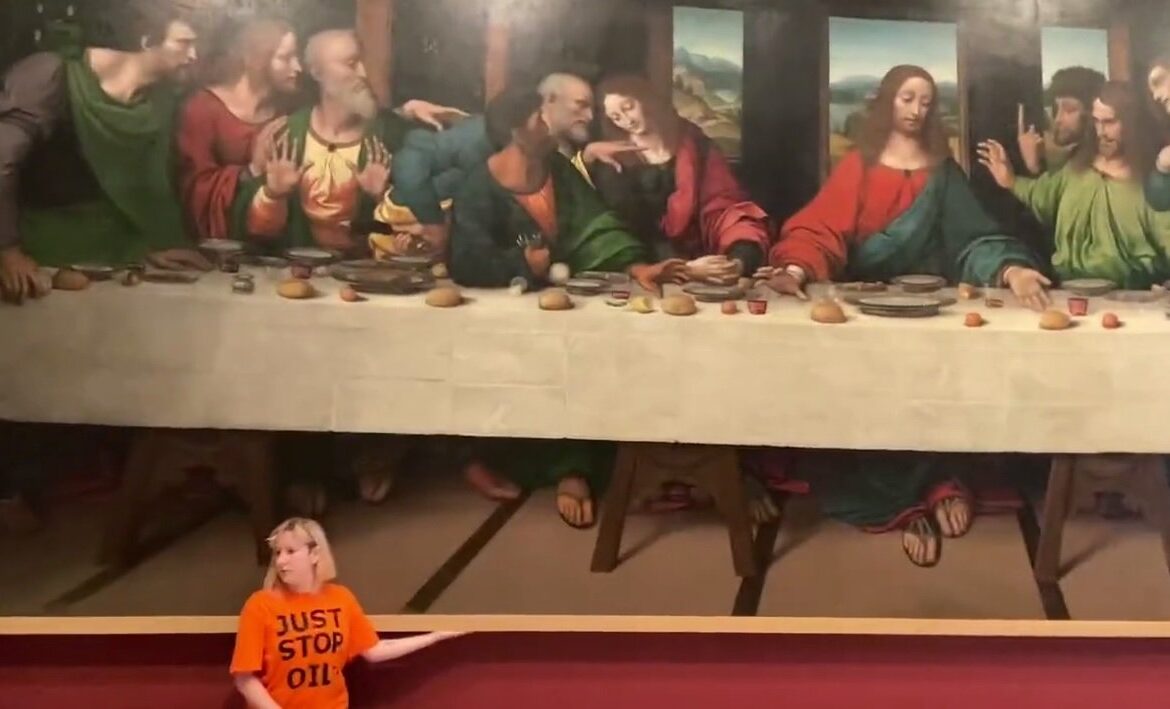 Environmental activists glued their hands to a copy of Leonardo da Vinci’s The Last Supper painting to protest climate change and fossil fuels at the Royal Academy art gallery in London Tuesday.

The group of demonstrators, who call themselves “Just Stop Oil,” spray-painted the words “No New Oil” below the 8 foot long artwork.

The copy painting of the Da Vinci masterpiece was reportedly painted by two of renaissance artist’s apprentices, Giampietrino and Giovanni Antonio Boltraffio around the year 1500, approximately 15 years after da Vinci painted the original.

Five of the protesters glued their hands to the frame of the painting. The museum was closed to the public during the demonstration.

The group gave demanded the gallery be shut down until the UK government block licenses for future oil and gas extraction.

“Ladies and gentleman, we are sorry for the disruption. Leonardo da Vinci said out of all the sciences art is the queen of communication. And now more than ever in this day and age, communication with truth and of the experience of humanity during these times of catastrophic climate is needed now more than ever,” one of the demonstrators exclaimed.

Climate change is a “death sentence” that is causing crops to fail and the rivers to dry up, the protester continued.

“We are here beneath this magnificent, beautiful painting today to join the dusk. We are facing an era of multiple bread basket failure. Crops are failing now all across the planet. India has stopped exporting any wheat,” he said.  “The Po River in Italy is drying up. This is Leonardo da Vinci’s own country here. It provides the country with a huge amount of agriculture. Our future is bleaker than ever and still our leaders are lying to us.”

The Last Supper depicts biblical scene in which Jesus tells his 12 apostles that one of them will betray him.

“We have a government which has essentially become a climate Judas. It has betrayed the younger generations,” he said. ” It has betrayed those in the global south right now who are facing the worse impacts of climate change. And so, we are here now to say no new oil.”

Four of the protesters remained glued to the painting for over three hours until they were removed by law enforcement officials.

Former elementary school teacher Lucy Porter was among the five activists who was apprehended for gluing herself to the painting.

“When I was teaching I brought my students to great institutions like the Royal Academy,” Porter told Sky News. “But now it feels unfair to expect them to respect our culture when their government is hellbent on destroying their future by licensing new oil and gas projects”

The da Vinci painting is fifth “Just Stop Oil” demonstrators have attached themselves to in the past week.

As the Gateway Pundit reported, last month, a pair of green activists glued themselves on the fame of a Vincent Van Gogh painting in another London gallery.

The unhinged leftists told their gallery audience, “Sorry everyone, we didn’t want to do this.”

A pair of environmental protesters in #Britain on Thursday glued themselves to the frame of a Vincent van Gogh painting on display at a London art gallery. pic.twitter.com/7veTNAfQt6

In May, a climate activist dressed as an old lady threw a cake at the Mona Lisa in France.

Maybe this is just nuts to me

but an man dressed as an old lady jumps out of a wheel chair and attempted to smash the bullet proof glass of the Mona Lisa. Then proceeds to smear cake on the glass, and throws roses everywhere all before being tackled by security.

The perpetrator was seen standing beside a wheel chair as he justified destroying the 700 year-old painting.

“There are people who are destroying the Earth (…) All artists, think of the Earth. That’s why I did this. Think about the planet,” he said.