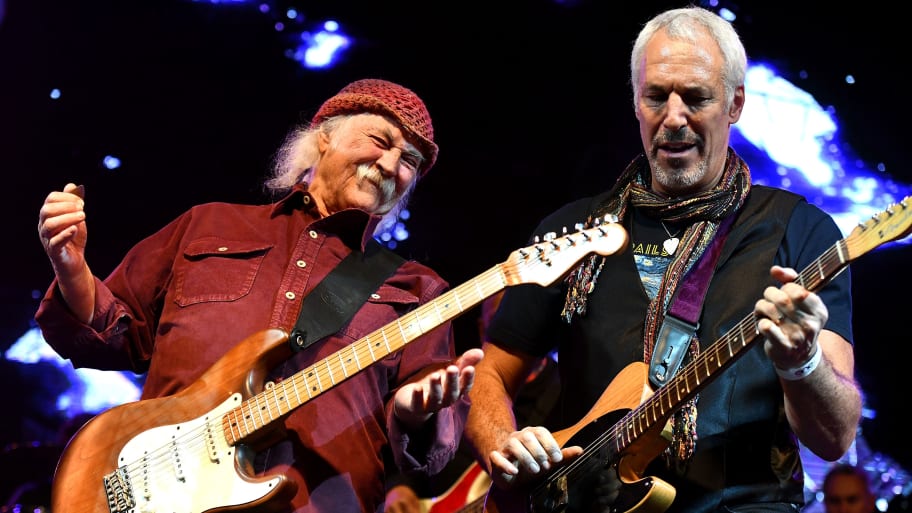 Crosby, Stills & Nash are back on Spotify after a five-month failed protest of podcaster Joe Rogan by the classic rock band.

The group pulled their library of songs off the streaming platform in support of ex-band member Neil Young, who spoke out against Rogan over alleged “disinformation” about COVID-19 vaccines. Young, the classic rock icon, removed his catalog from Spotify earlier this year after the audio streaming company refused his demand to fire Rogan.

“They can have Rogan or Young. Not both,” Young wrote in a letter to his record company’s parent, Warner Records.

The folk rockers’ Spotify return comes nearly half a year after they ditched the app in solidarity with their former band mate, Neil Young. https://t.co/8Zy5GrIlD3

Following Young’s decision to remove his music from Spotify, his former bandmates Graham Nash, Stephen Stills and David Crosby followed suit. The group released a statement in February: “We support Neil and we agree with him that there is dangerous disinformation being aired on Spotify’s Joe Rogan podcast.”

“While we always value alternate points of view, knowingly spreading disinformation during this global pandemic has deadly consequences,” the band’s statement read.

“Until real action is taken to show that a concern for humanity must be balanced with commerce, we don’t want our music — or the music we made together — to be on the same platform.”

According to Billboard, the band reportedly plans to donate their ongoing earnings from streams to charities aiding those infected with COVID-19.

Rogan is one of the platform’s most listened-to podcasts, with an estimated audience of some 11 million frequent listeners. He signed a $200 million exclusive licensing agreement with Spotify in May 2020.

On Monday, the band’s music reappeared on the music streaming platform, indicating they were unsuccessful in making their statement against Rogan.

Crosby, Stills and Nash have decided to return to Spotify following their boycott that began in February to protest podcaster Joe Rogan’s content.https://t.co/pQXY9x5oPg

However, Young, the “Rockin’ in the Free World” renowned artist, remains off of Spotify and unavailable to its 182 million paid subscribers as of Monday.

The post Crosby, Stills & Nash Return To Spotify After Failed Protest of Joe Rogan appeared first on The Gateway Pundit.