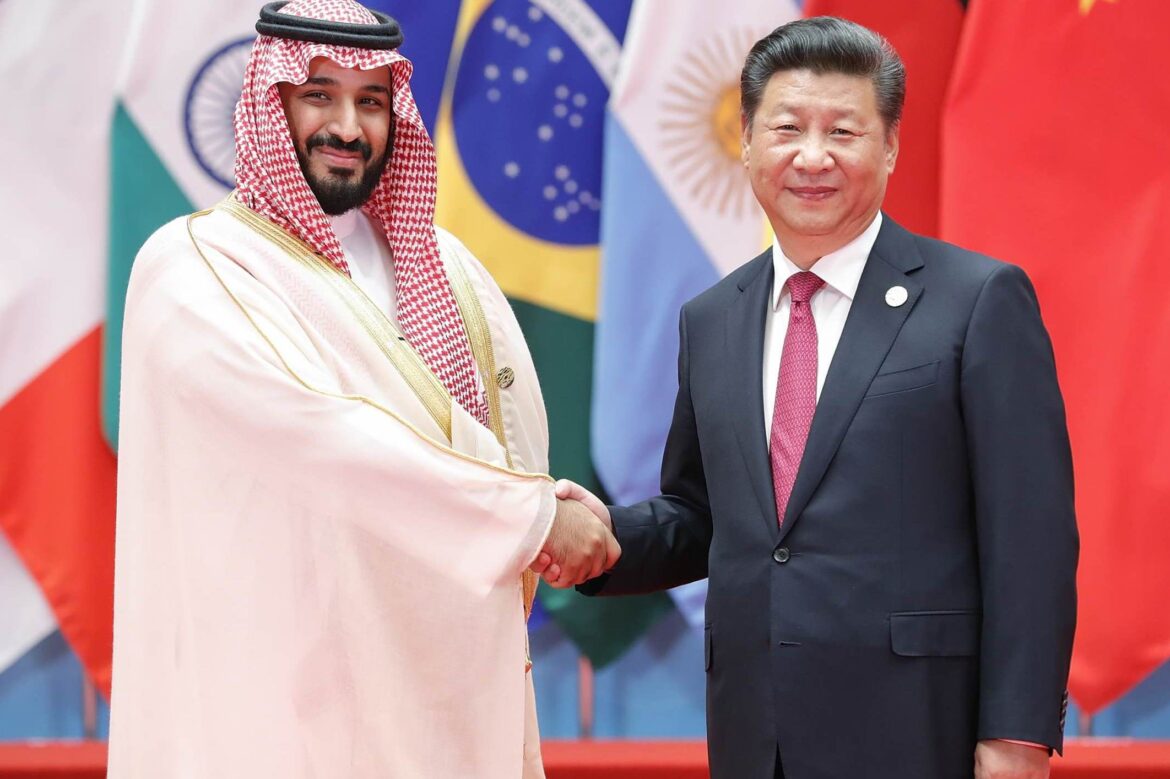 The Biden Factor: Saudi Arabia Is in Discussions to Join the BRICS Coalition with China and Russia and Move Away from US with Potentially Explosive Consequences

Saudi Arabia, the largest U.S. export market in the Middle East, invited Chinese President Xi to visit Riyadh in March as relations with the U.S. have faltered since Joe Biden was elected, The Wall Street Journal reported.

According to a report from CNN, U.S. intelligence agencies have assessed that Saudi Arabia is now actively manufacturing its own ballistic missiles with the help of China, a relationship that could lead to domino effects across Middle East countries.

Under Biden, the American leader is openly mocked on the international stage.  U.S. allies are now aligning with China.

Saudi Arabia announced in March it was considering accepting the Chinese yuan instead of the US dollar in future transactions.

This is the move Steve Bannon and the War Room have been warning you about for the past year.

It will end US dollar supremacy — and it was facilitated by Joe Biden, Democrats, and the Uniparty members.

Saudi Arabia is in talks with Beijing to price some of its oil sales to China in Yuan, a move that would dent the U.S dollar’s dominance of the global oil market. If priced in Yuan, than it would boost the Chinese currency instead of USD. https://t.co/lQ9mzTSdQu

Joe Biden and his handlers are destroying the United States.

And now Saudi Arabia has been invited to join the Shanghai Cooperation Organization (SCO) and BRICS.

The announcement comes before Joe Biden’s upcoming trip to Riyadh.

Conservative Treehouse weighed in on this major development.

Is this strategic geopolitical pressure from Saudi leader Mohamed Bin Salman (MbS) ahead of the meeting with Biden; or is this a genuine possibility that looms as likely?  If the former, then Joe Biden is being geopolitically slow-roasted by Saudi Arabia for his previous disparagements and ideological hypocrisy in his visit.  If it is the latter, well, then the tectonic plates of international trade, banking and economics are about to shift directly under our American feet.

We have been closely monitoring the signs of a global cleaving around the energy sector taking place.  Essentially, western governments’ following the “Build Back Better” climate change agenda which stops using coal, oil and gas to power their economic engine, while the rest of the growing economic world continues using the more efficient and traditional forms of energy to power their economies.

This article from Newsweek is exactly about this dynamic with Saudi Arabia now potentially joining the BRICS team.

In the East, however, security and economy-focused blocs led by Beijing and Moscow are looking to take on new members of their own, including Iran and Saudi Arabia, two influential Middle Eastern rivals whose interest in shoring up cooperation on this new front could have a significant impact on global geopolitical balance.

The two bodies in question are the Shanghai Cooperation Organization (SCO) and BRICS. The former was established in 2001 as a six-member political, economic and military coalition including China, Russia and the Central Asian states of Kazakhstan, Kyrgyzstan and Tajikistan before recruiting South Asian nemeses India and Pakistan in 2017, while the latter is a grouping of emerging economic powers originally consisting of Brazil, Russia, India and China (BRIC) upon its inception 2006, and including South Africa in 2010.

“The BRICS and the SCO share one important ideological quality: they are both focused on multipolarity, and their summits have even been held back to back with one another at times,” Matthew Neapole, an international affairs expert and contributor to the Macdonald-Laurier Institute in Canada, told Newsweek.

“Both are angling to act as force multipliers for this drive for multipolarity, to help along with alternatives [i.e, in currency or banking],” he added. “It could, in theory, facilitate economic linkages and step into gaps that U.S. institutions are not filling due to sanctions, such as those laid on Russia.”

Across the Persian Gulf, Saudi Arabia has also reportedly considered applying for BRICS membership, as revealed by Russian Foreign Minister Sergey Lavrov during his visit to the kingdom in late May. The announcement followed Saudi Arabia joining Argentina, Egypt, Indonesia, Kazakhstan, Nigeria, Senegal, Thailand and the United Arab Emirates at China’s invitation for a “BRICS+” discussion, after which Chinese Foreign Ministry spokesperson Wang Wenbin announced members had “reached consensus on the BRICS expansion process.”

The post The Biden Factor: Saudi Arabia Is in Discussions to Join the BRICS Coalition with China and Russia and Move Away from US with Potentially Explosive Consequences appeared first on The Gateway Pundit.