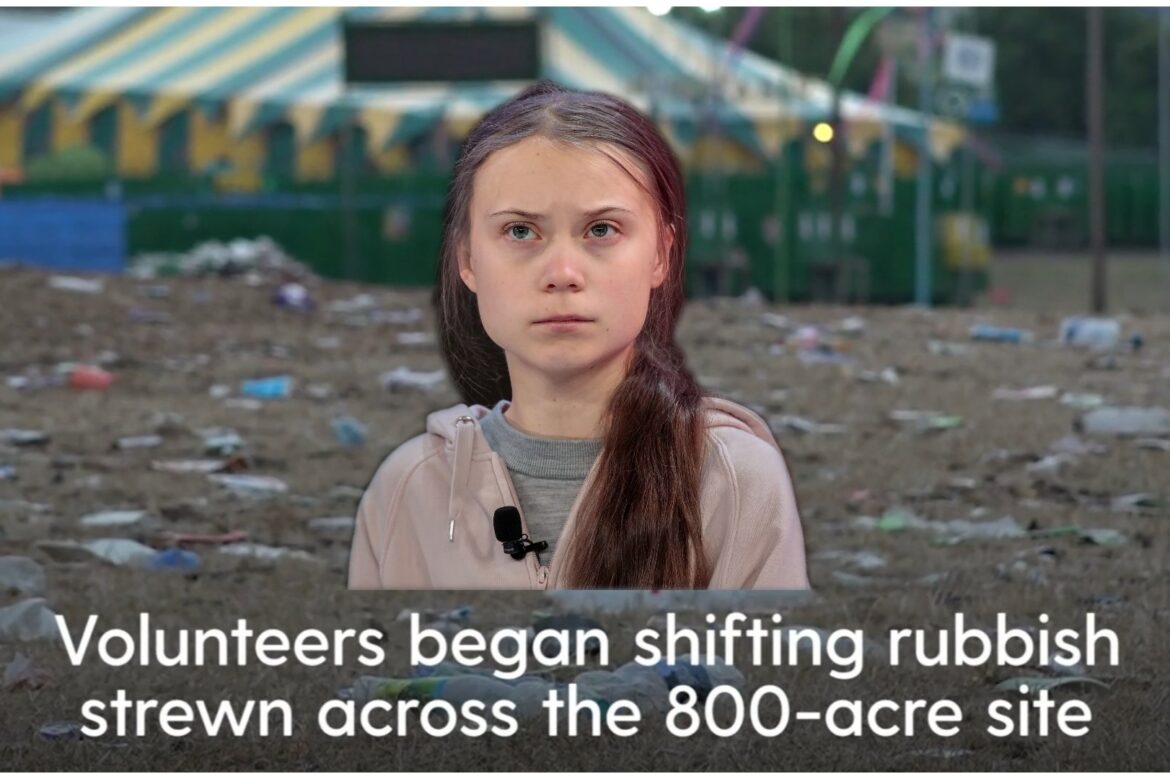 It’s no secret that leftist ideologues, especially those of the ‘climate change’ variety, are some of the most egregious offenders when it comes to hypocrisy. Some of the most fervent advocates of the ‘save the planet’ crusade are often caught failing to live up to their proclaimed standards (climate change warrior John Kerry and his private jet flights, as just one example).

While we are all familiar with the hyper-delusion and psychopath-level hypocrisy that is prevalent among the elitists, this duplicitous behavior can be found throughout the climate-obsessed within the leftist hierarchy. Instead of hopping on their private jets and yachts in defiance of their stated agenda, the masses are beholden to a lesser form of self-righteous denial that is equally inconsistent with the green agenda.

And this stinking hypocrisy was on full display this week when Greta Thunberg, the young face of the green movement, made an appearance last week at the Glastonbury Festival 2022.

Thunberg was given the festival’s main pyramid stage to preach about climate and environmental ‘justice.’ Facing tens of thousands at the packed event, she screeched for the people of the world to come together in order to heal the planet and protect it from the evil no good humans and their fossil fuels.

“We are capable of the most incredible things,” she said. “Once we are given the full story… we will know what to do. There is still time to choose a new path, to step back from the cliff”… Whatever that means.

As she shouted “climate,” the crowd roared back “justice” to show their allegiance to the leftist dogma of the day.

Unfortunately, the buzz from the mass formation psychosis must not have lasted very long – within minutes of Thunberg leaving the stage, the attendees cleared out, leaving a disgusting mess in their wake.

Pictures from the event show what looks like a massive trash dump, with chairs and litter strewn across the entire area. They created a literal sea of trash – I don’t think this is the type of coming together she was talking about.

They must have been tired after a full day of virtue signaling.

Photos from the main stage, where Thunberg spoke, show the complete scene (video can be found here):

Another photo showing one of the areas to get food shows an even worse mess (video can be found here):

Local news reported that the amount of litter thrown everywhere is “demoralizing” for the volunteers who had to go in and clean up the mess.

Thousands are on hand to clean up the mess, with at least 700 tasked with cleaning up the main pyramid stage. It could take as long as 4 days for the entire cleanup to be completed.

“With the country’s biggest festival over, the big clean up of the Glastonbury stages begins. Hundreds of volunteers have been seen first thing this morning getting ready to tackle the litter strewn fields.

The Pyramid stage alone has an estimated around 700 volunteers on board to leave the area as it was before thousands of people arrived to the event.”

Fake news media sources jumped in to try and cover for the festivalgoers’ hypocrisy, with several including the AP claiming that photos circulating from the event are not actually from this year, but are actually from 2015. This is only partially true, while there are some photos circulating online from 2015 that are not accurate, the fact checks fail to mention the massive sea of trash that was left behind this year following Greta’s appearance at the festival.

As with most forms of fake news, its effectiveness is highly reliant on the reader only catching the headline. Buried at the very bottom of the AP’s fact check was an admission about this year’s disgusting mess that was left by the festival attendees.

“Similar photos of the trash-strewn site, and the cleanup, emerged in subsequent years and photos from this year show that attendees left behind rubbish once again. After the event wrapped on Sunday, people were shown cleaning up the venue. An official account affiliated with the festival tweeted photos on Monday showing that litter pickers had cleared the field of trash.”

Below are some of the examples of photos that were from 2015.

Nobody listened to Greta’s save the environment speech clearly…. pic.twitter.com/wYaBPIZ6w9

The aftermath of the climate change thing at Glastonbury…clearly a huge impact on the participants. pic.twitter.com/42hdSUErrL

This time around they were asked to clean up by festival organizers and even Greta Thunberg, but, as you can see in the photos from this year, the festival grounds were similarly trashed in 2022, albeit less so – proving, once again, that leftists are nothing but a bunch of stinking hypocrites when it comes to the green environment agenda.

Apparently, climate change activists seem to be under the impression that it’s ok to dump trash everywhere because someone else is going to pick it up.

‘Climate justice,’ what a joke.