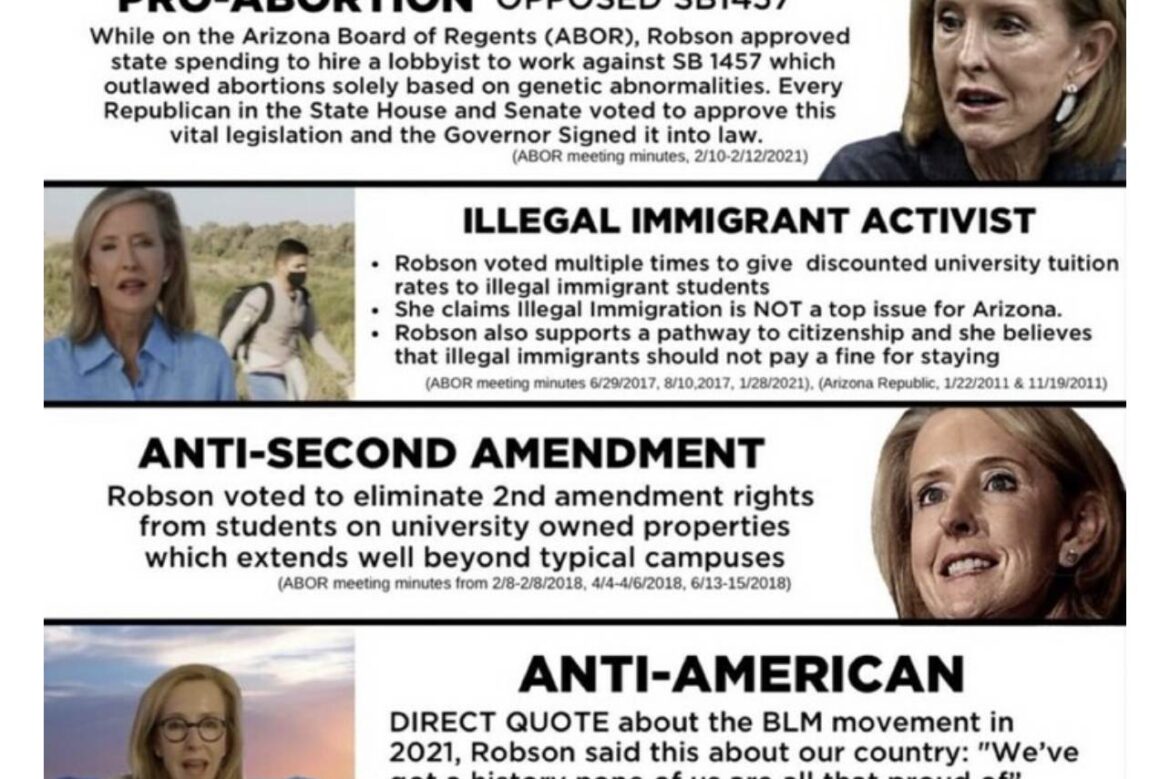 ‘Weak RINO’ AZ Gubernatorial Candidate Karrin Taylor Robson Takes Softball Interview With Loser Bret Baier: “The left And The Democrats Want Us Stuck In 2020… But We Have To Look Ahead” (VIDEO) Arizona RINO Billionaire Karrin Taylor Robson, the establishment choice for Governor, recently said we need to move on from the Rigged and Stolen 2020 Election in an interview with establishment crank Bret Baier.

Bret Baier is best known as the Fake News Hack, who called the State of Arizona for Joe Biden before the polls closed while voters were still lined-up to vote. These days, he avoids talking about the horrible Rigged 2020 Election.

Karrin Taylor Robson, Bret Baier’s favorite for Arizona Governor, is extremely out of touch with Arizona voters, who know the 2020 Election was stolen and demand answers.

The Gateway Pundit has reported extensively on the Stolen Election in Arizona, the Arizona audit, and True the Vote’s “2000 Mules” documentary, all of which proved massive voter fraud. Yet, Bret Baier and Karrin Taylor Robson still refuse to acknowledge it.

Thankfully, Trump-Endorsed Gubernatorial Candidate Kari Lake is vowing to get to the bottom of 2020 right after the New Right takes back 2022.

The Gateway Pundit recently reported that Bret Baier attempted to hit Lake with a fake story pushed by the Washington Post. Instead, he got schooled by walk-away career news anchor and trained media professional Kari Lake. This was Lake’s first primetime Fox interview, and she killed it!

“I Am Really Disappointed in FOX, I Thought You Were Better Than CNN!” – BOOM! Kari Lake INCINERATES Bret Baier and FOX News for Pushing FAKE STORY on AZ Drag Queen (VIDEO)

Lake came back at Baier, asking why he refuses to talk about the Stolen 2020 Presidential Election and why Fox refuses to address Karrin Taylor Robson’s establishment RINO record, despite inviting her on countess times.

Because of Lake’s courage in fighting for the truth about the 2020 Election and taking on the Fake News Media, President Trump has endorsed Kari Lake not just once but twice. And he has praised Lake in numerous other statements.

JUST IN: President Trump issues another official statement/endorsement on our race in Arizona.

Thank you, Mr. President. I am honored to have your endorsement & your continued support as we work to Make America Great Again! #MAGA pic.twitter.com/SSdxPO9wJ5

Kari Lake is known across the Nation for her skills in punching back at the Fraudulent Fake News Media. This is just one of the many reasons President Trump said that “Kari Lake will go down as the greatest Governor in our country’s history.”

In a recent interview with Robson, Bret Baier didn’t ask a single tough question relating to her past or her liberal record.

Robson voted for terrible liberal policies after RINO Doug Ducey appointed her to the Arizona Board of Regents (the governing board for the state’s public universities) in 2017. She also supports transgender restrooms at her husband’s sporting arena and donated to Democrat Rep. Ruben Gallego, “Arizona’s AOC.” President Trump has called her a “weak RINO.” Instead of putting her on the spot as he did to Kari, Baier threw softball questions to Karrin Taylor Robson, one of Fox News’s major ad sponsors.

According to seethemoney.az.gov, RINO Karrin Taylor Robson has already spent a whopping $4,254,240.22 on ad buys with Mentzer Media Services, Inc. Robson is a frequent ad buyer and guest on Fox News, and she is buying the Arizona Governor seat with her 91-year-old husband’s money.

Bret asked Robson one question about the 2020 Presidential Election, and she refused to admit that it was stolen from President Trump. Instead, she stated, “we have to look ahead” and forget about it because “the Democrats want us stuck in 2020,” an obvious lie. Democrats want us to move on and stop asking questions about the fraudulent Biden Regime. This is why the Democrats are fighting so hard to suppress the truth and using the federal government to target conservatives, as The Gateway Pundit previously reported.

Robson: Well, at a minimum, the 2020 Election was not fair at all. And we’ve learned a lot, and we have to do things in order to restore confidence in our Election. From increasing penalties for ballot harvesting, to ensuring we have voter ID, to ensuring our voter rolls are cleaned up so that dead people don’t get ballots or people who have moved don’t get ballots. The left and the Democrats want us stuck in 2020. Yes, we have to fix things, but we have to look ahead, and that’s what I’m doing. The people in Arizona are more focused on putting gas in their tank. Every time I go to the gas pump, I’m reminded that the wrong guy is in the White House. And that’s what I’m focused on, is making sure that in 2022, Arizona stays in Republican hands.

The people of Arizona understand that this Stolen Election destroyed our economy, launched gas prices to an all-time high, and left the southern border wide-open.

Robson was asked three easy questions about what differentiates her from the other candidates, the Southern Border crisis, and what she thinks of the 2020 Election. Lake, however, faced many much more aggressive questions and an attempted hit job by “Unfair Bret Baier.”

Kari Lake shared this clip and said, “Call it what it is: That election was undeniably STOLEN, CORRUPT, and RIGGED.” Lake is the only candidate willing to speak the truth and get to the bottom of 2020. She followed this with another Tweet, bashing Fox for going silent on the Stolen Election and refusing to bring her on the station. Dishonest Fox News will not talk about the Stolen 2020 Election, just like liberal CNN and MSDNC.

I’d hate to think that @FoxNews is blocking the Trump-Endorsed Frontrunner (by 20 points, mind you) from their Network because they are worried I might mention the 2020 Election. @newsmax and @OANN will interview me. Why not @FoxNews?

Watch both interviews here and here.

Bret Baier doesn’t want Kari to win because she will prove him wrong on his bullsh*t 2020 election prediction.

The post ‘Weak RINO’ AZ Gubernatorial Candidate Karrin Taylor Robson Takes Softball Interview With Loser Bret Baier: “The left And The Democrats Want Us Stuck In 2020… But We Have To Look Ahead” (VIDEO) appeared first on The Gateway Pundit.