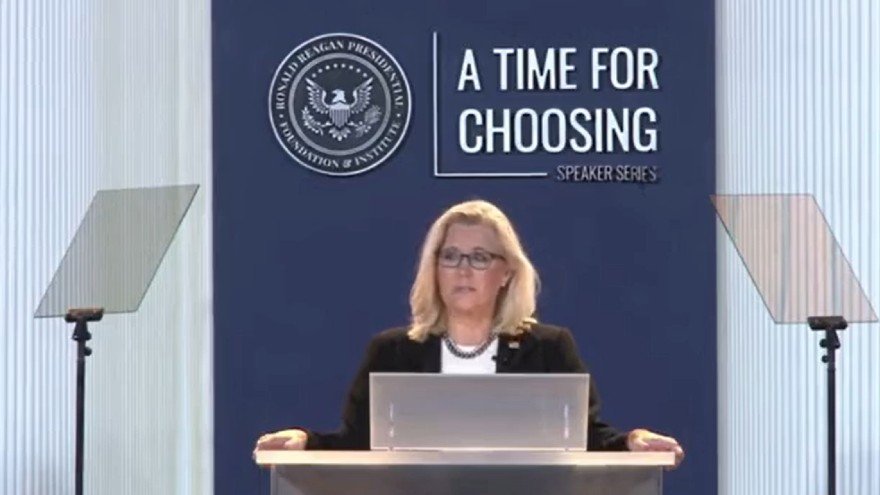 Congresswoman Liz Cheney condemned Republicans who support President Trump while praising the false testimony of her star witness Cassidy Hutchinson during a speech on Wednesday.

Her damning words were delivered at the Ronald Reagan Presidential Foundation & Institute in California. Cheney addressed ongoing Republican support for President Trump. During the speech, she implied that the January 6 riots were Trump’s efforts to overturn the 2020 election and threaten the nation’s democracy. Cheney, the vice chairwoman of the sham January 6 committee, said that Republicans must choose between being good statesmen and supporting the efforts of Trump.

How did Liz ever get invited to the Reagan Library?  What is going on?

“The reality that we face today as Republicans, as we think about the choice in front of us — we have to choose because Republicans cannot both be loyal to Donald Trump and loyal to the Constitution,” Cheney said to applause.

Cheney is one of five Republicans who turned their backs on the Republican majority to support Trump’s impeachment. She faces a tough primary challenge from Harriet Hageman, who Trump endorses. Despite the upcoming challenge, Cheney continues to host a plethora of hearings with the sham January 6 committee.

On Wednesday, Cheney called Trump a “domestic threat,” unlike what has ever been seen before.

She said the former President is “attempting to unravel the foundations of our constitutional republic, and he is aided by Republican leaders and elected officials who have made themselves willing hostages to this dangerous and irrational man.”

The Congresswoman praised her star witness from this week, Cassidy Hutchinson. The one-time aid to former White House chief of staff Mark Meadows delivered testimony to the sham January 6 panel on Tuesday about the events of that day, filled with hearsay.

Hutchinson’s, now thoroughly debunked, testimony indicated Trump was aware people in the crowd were armed with weapons, saying an irate Trump tried to assault a U.S. Secret Service Agent as he demanded being taken to the scene of the riots. She even claimed to have written a note for the President asking him to call off the crowd, a claim which the note’s author has refuted.

During her Wednesday speech, Cheney said, “Her superiors, men many years older, a number of them are hiding behind executive privilege, anonymity, and intimidation.”

Cheney continues to prove herself a traitor to the America First values, common to her family, as her father, former Vice President Dick Cheney, was known to do.