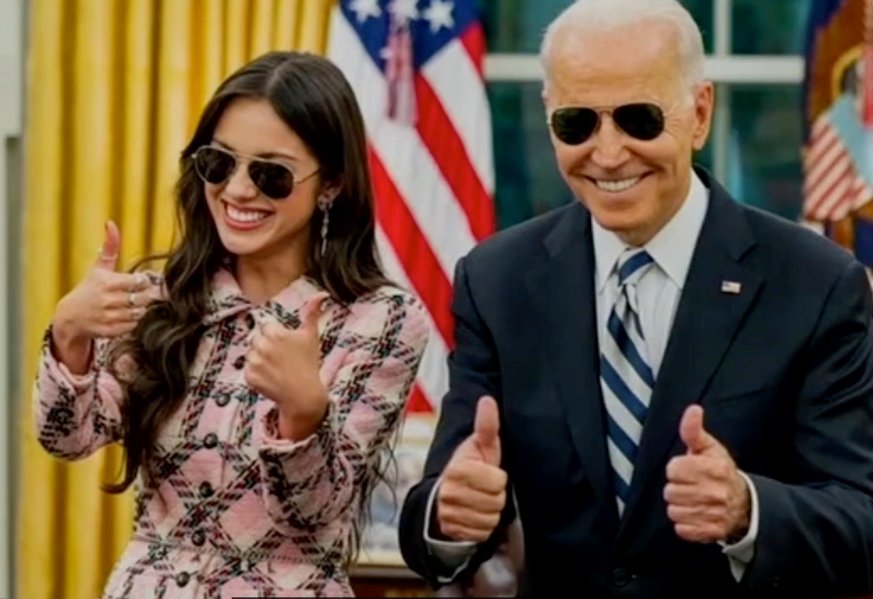 WATCH: Pop Singer, Former Disney Star And Biden Influencer Olivia Rodrigo On SCOTUS Decision To Overturn Roe v. Wade: “SO MANY Women And SO MANY Girls Are Gonna DIE Because Of This.”

Former Disney Channel star Olivia Rodrigo went viral this past weekend after making an absurd statement on the Supreme Court’s overruling of Roe v. Wade during a concert in England

She brought out fellow singer Lily Allen to dedicate one of Allen’s songs, titled ‘F*ck You,’ to Justice Samuel Alito and the Justices who sided with his opinion.

“We hate you,” they both told SCOTUS before their performance.

Since starring in Disney shows as a child, Rodrigo has risen to fame as a pop music singer/songwriter popular among American youth. Rodrigo has millions of social media followers.

Olivia Rodrigo is also a member of Joe Biden’s “influencer army.” The Gateway Pundit previously reported on the Biden Regime’s use of celebrities to push propaganda, promote the experimental COVID-19 vaccine and combat any so-called misinformation.

With her ties to the Disney Channel and the Biden Regime, this girl is a trained propagandist.

On Wednesday, Olivia Rodrigo, the 18-year-old pop star with the No. 1 album in the country, visited the White House and joined the Biden administration’s efforts to use the young and influential to reach the young and unvaccinated.

“It’s important to have conversations with friends and family members,” Ms. Rodrigo said, reading from prepared remarks during a short appearance in the White House briefing room, “and actually get to a vaccination site, which you can do more easily than ever before.”

The White House could not have scripted it better. (In fact, White House officials helped her craft her remarks, according to an administration official.

The 19-year-old Olivia Rodrigo brought Lily Allen on stage last Saturday to deliver a message to the US Supreme Court from England. “We hate you,” they announced before singing ‘F*ck You.’

Rodrigo: I’m devastated and terrified. So many women and so many girls are going to die because of this. And I wanted to dedicate this next song to five members of the Supreme Court who showed us that at the end of the day, they truly don’t give a sh*t about freedom.

This song goes out to the Justice Samuel Alito, Clarence Thomas, Neil Gorsuch, Amy Coney Barrett and Brett Kavanaugh. We hate you.

Allen: We hate you.

Allen boasted two middle fingers when saying, “We hate you.” They then laughed and chuckled as if they weren’t didn’t really believe that “so many women and so many girls are going to die.”

She really is a genius, isn’t she?

How many women or girls are not alive today because of legal abortions?

How about sex-selective abortions that discriminate against girls?

What about women who die from legal abortion complications or post-abortion suicide? The Lozier Institute reported, “a United States study examining 173,279 low-income California Medicaid patients found that women who underwent abortions had nearly double the chance of dying in the following two years, and ‘had a 154 percent higher risk of death from suicide’ than if they gave birth.”

Ironically, Rodrigo only believes in “my body, my choice” when it comes to abortion. Rodrigo’s concerts are only open to those who have taken the experimental COVID vaccine.

She is a White House vaccine influencer, after all.

A brave Arizona father and supporter of Kari Lake for Governor recently went viral for burning concert tickets worth $3,500 in protest of the Biden influencer’s vaccine mandate. “There comes a point in life that you got to take a stand for your values,” he said before lighting his and his family’s concert tickets on fire.

A Kari Lake supporter who recently visited Mar-a-Lago burned his family’s Olivia Rodrigo concert tickets worth $3,500 due to the performer’s vaccine requirement. pic.twitter.com/10dixdiu9q

How many women have died after taking the experimental vaccine that was promoted and mandated by Rodrigo?

Is the White House now paying her to spread pro-abortion messages?

Olivia Rodrigo is an embarrassment.

The post WATCH: Pop Singer, Former Disney Star And Biden Influencer Olivia Rodrigo On SCOTUS Decision To Overturn Roe v. Wade: “SO MANY Women And SO MANY Girls Are Gonna DIE Because Of This.” appeared first on The Gateway Pundit.