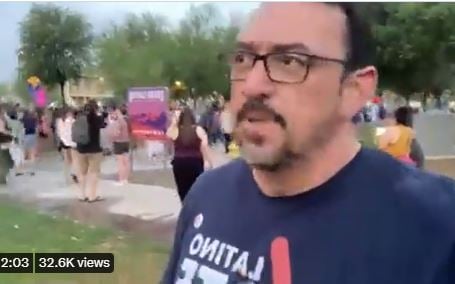 Arizona State Representative and Trump-endorsed Candidate for Secretary of State Mark Finchem recently called on the Attorney General’s Office to investigate Democrat Adrian Fontes and others involved in inciting the June 24 insurrection on the Arizona Capitol.

Radical leftists attempted to raid the Capitol last week in opposition to a recent SCOTUS decision to overturn Roe v. Wade and give the power back to the States. Finchem released a statement last Friday supporting the Court’s decision to reinforce States’ rights.

The Gateway Pundit reported that on Friday, June 24th, anti-life protests and riots erupted across the nation. The Arizona Senate building was breached by a mob of left-wing insurgents while legislators were inside the building.

The insurrection continued the next night when leftist thugs assembled and made a second attempt to breach the Capitol.

Swift action by Arizona DPS officers prevented the invasions, and many rioters were taken into police custody.

The left-wing extremists did, however, cause damage to the Arizona Senate building. They also vandalized sacred monuments, including World War II monuments and other memorials at the Wesley Bolin Memorial Park. As The Gateway Pundit reported, Women’s March and other left-wing organizations were behind this riot and many others across the nation. Democrats in Arizona also helped provoke the J24 riot and incite violence at the Capitol. Fontes later tweeted a video of himself at the riot outside of the Capitol just before violence erupted on Friday night. “Freedom has been basically quashed by the United States Supreme Court,” Fontes said before calling the decision an “attack on Democracy.” Mark Finchem released a statement Monday, calling on the Attorney General to investigate 2020 Election Burglar Adrian “Fast and Furious” Fontes and all others behind this assault on the Arizona Capitol.

Fontes is known for representing accused ring leader Manuel Celis-Acosta during the Fast and Furious investigation scandal. He is also known for circumventing the law and allowing election fraud as Maricopa County Recorder, and he is now running to be the Democratic nominee for Arizona Secretary of State.

Adrian “Fast and Furious” Fontes — the same person who was responsible for the 2020 Maricopa County election debacle — can’t get his facts straight. The Supreme Court of the United States held that Roe v. Wade was a mistaken opinion in the first place, as it did not take into account the rights of the state to make decisions about the people, but instead set a federal judicial standard for abortion.

Fontes, by aligning himself with the “night of rage“, actually participated in an insurrection against the state of Arizona Legislature. That is disgraceful behavior. We will see more of the same from Adrian Fontes, just as we have seen from Katie Hobbs: lawlessness and a failure to enforce the elections procedure manual, which carries the weight of law.

The insurrection resulted in the defacing of veterans’ monuments, the near-breach of the Arizona Senate Building, and attempts to intimidate elected officials while they were holding session to do the peoples’ work.

I am therefore calling on the Attorney General’s office to identify the individuals behind the assault on the Senate on June 24th, and to prosecute them to the fullest extent of the law.

BREAKING: Mark Finchem Calls on the Attorney General’s Office to Investigate Adrian Fontes and Others Involved in the June 24th Arizona Riot & Insurrectionhttps://t.co/0Ooj6cuexX

The post State Rep. Mark Finchem Calls On The Attorney General’s Office To Investigate Democrat Adrian “Fast and Furious” Fontes And Others Involved In The June 24th AZ Riot & Insurrection appeared first on The Gateway Pundit.