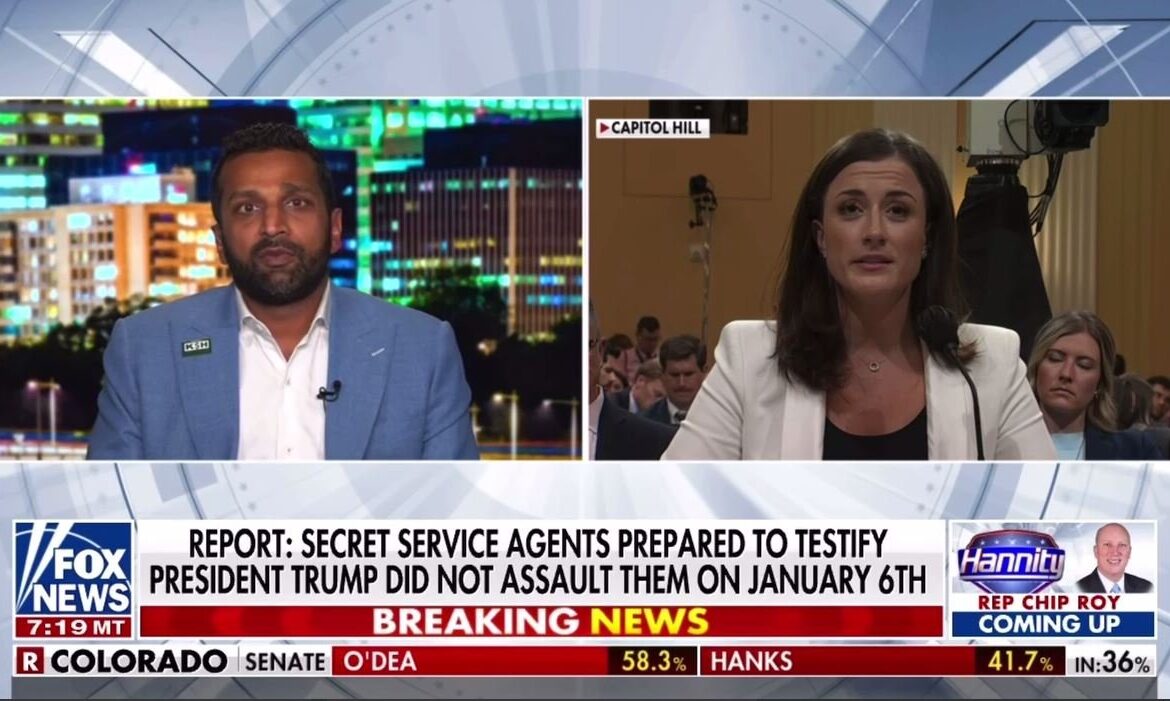 Kash Patel, the Former Chief of Staff to the Secretary of Defense, joined Hannity following the latest episode of the Jan. 6 Committee show trials.

Cassidy came out and perjured herself for several hours on national TV.

The junior Mark Meadows staffer was caught in several lies during her ridiculous testimony about President Trump fighting the Secret Service for control of “The Beast” on January 6th.

MORE LIES: Cassidy Hutchinson ALSO Lied about Handwritten Note in Testimony — And Liz Cheney KNEW IT WAS A FALSE because the Actual Author of the Note Testified It Was His!

Kash Patel was in the meeting with President Trump on January 4, 2021, when he asked for 20,000 National Guard troops for the upcoming protests and Congressional hearings.

The Democrats, Seargeant at Arms, and DC Mayor all turned down the extra protection at the nation’s Capitol that week.

Kash also told the Hannity audience that he has taken several trips with the agents who traveled with Trump that day and that they are ready to testify.

Kash Patel: I was in the Oval Office with the Secretary of Defense, the Chairman of the Joint Chiefs of Staff, and the Chief of Staff of the President of the United the States, along with the 45th President. And we were working on a very sensitive operation totally unrelated to January 6, which is why it sticks into my mind. And the President, on his own after that meeting about a different topic, said, if you guys need up to 20,000 National Guards men and women across the United States for the upcoming days and any activity related to January 6, you have my authorization as Commander in Chief to go forward. That was the authorization, as you outlined, that the law required.

Sean Hannity:  And you testified to all of this before the January 6 Committee, as did Chris Miller, the Secretary of Defense at the time?

Kash Patel:  Yes, and as did anybody else that was in that room, as did Chairman Milley. And as you and I both know, Sean, this committee would have leaked information had Chairman Milley testified under oath that contradicted anything that Chris Miller and I have both said on your show and to this committee. And so since that leak has not occurred by the likes of Adam Schiff, you know that we have been testifying truthfully and anything to the contrary is absolutely false. And the Capital police timeline backs it up that Mayor Bowser and the Sergeant in Arms declined the Department of Defense’s request and authorization of National Guard not only on January 4, but on January 5 and in the morning of January 6. So they did not want us there for political optics.

Sean Hannity:  Now, one of the big so called bombshells to come out of the hearing today was that Donald Trump got angry and demanded that the Secret Service drive him to the capital. And when Bobby Engel and another agent, Tony, I’m not sure how to pronounce else’s last name…

Sean Hannity:  Ornato in fact, when they were taking him, they said, it’s best Sir, that we take you back to the White House where it’s safer. There’s reports by ABC, NBC, and now Fox News confirming Kash that, in fact, they’re willing to testify under oath that what this witness today, hearsay witness today testified to is absolutely false. Do you know those agents.

Kash Patel:  I served with, both Bobby and Tony.  They are career Civil Service agents. They are former military. They embody what career government officials should be. I would take their word over any word of this junior staffer who is completely, I believe, lying to the January 6 Committee for own self gain. Bobby and Tony acted appropriately. Every single time I traveled with the President, over 40 separate trips with those two individuals. I would love to hear them contradict this lie with the truth, but I’m a little different on this one. Bobby and Tony need to continue to serve America. We don’t need to put them on full blast. If they’re willing to come out and say that she lied, that should be good enough for both the American people and this committee, because they have more service to do than help politicize this kangaroo court.

Via Hannity and The Storm Has Arrived.