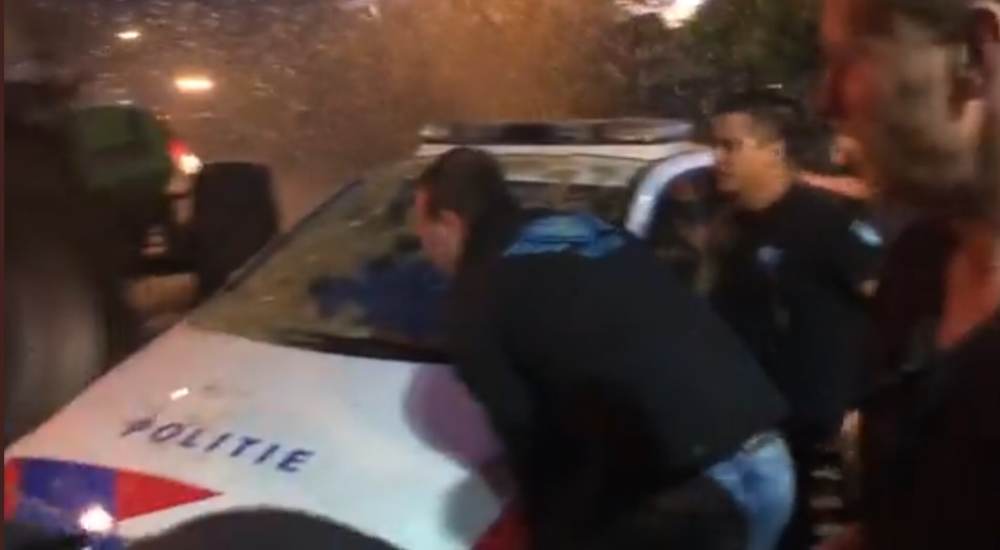 Farmers protested and rioted in Holland this past week as the government has declared war on livestock farming, setting a goal of reducing nitrogen emissions by 50 percent by 2030, drastically reducing herds, forcing many farmers out of business and cutting back on meat, pork, poultry and dairy food for human consumption. To accomplish this the government expects to reduce by one-third Holland’s 50,000 farms by 2030. Tuesday night farmers attacked a police car barricade to march on the home of Holland’s Nitrogen and Nature minister where they set off fireworks and burned bales of hay in protest, reported Dutch Review (excerpt):

On Tuesday evening, a group of rioting farmers broke through a police barricade and headed towards the Dutch Nitrogen and Nature Minister’s home.

The farmers pushed down a police car that was supposed to block the way towards minister Van der Wall’s house so that they could drive their tractors down the street.

A group of rioters also set off fireworks at the house, according to the NOS. At the time, the minister wasn’t present at home, but her family had to deal with the violent circumstances.

“Police indicate that they can do little against the tractors”

“Police officers indicated tonight that in fact nothing can be done against the tractors. Two officers literally had to flee when their car was pulled over and a tractor broke through the opening. An agent: ‘Then you should deploy the army.’”

Last week farmers blocked roads with tractors in protest of the war on food production.

The amount of nitrogen compound pollution in some parts of the Netherlands will have to be cut by 70% to 80% to comply with a Dutch court ruling, the NRC reported on Friday.

Sources in The Hague told the paper that the government’s strategy to take a regional approach to the issue will lead to major problems in parts of Gelderland and Noord-Brabant, where livestock farming is concentrated and a number of vulnerable habitats are being seriously damaged.

To meet the new rules, the amount of livestock farming will have to be reduced drastically, and that means some farmers will have to be bought out and shut down their operations, the paper said.

Nitrogen-based pollution is behind delays to the building of new homes and roads, has led to plans to reduce the number of cows and pigs in the Netherlands and is causing damage to rare habitats. Here’s what you need to know.

Nitrogen, or N2, constitutes 78% of the atmosphere and is harmless to life on earth. In a reactive form it is essential for life: all organisms need reactive nitrogen.

It is a colourless, odorless element and is found in the water we drink, the soil we walk on and in the air we breath. But in the Netherlands, which is densely populated and has an extremely intensive farming sector, it is also a major source of pollution. The new government even has a minister dedicated to dealing with it.

What is nitrogen pollution?
Nitrogen can also be highly polluting when some compounds – like ammonia (NH3), nitrogen oxides (NOx) and nitrous oxide (N2O) – are present in high concentrations. Nitrous oxide is also known as the forgotten greenhouse gas. In the Netherlands, nitrogen pollution derives from two main sources – burning fossil fuels for energy or transport (nitrogen oxides), and from the manure created by the livestock farming industry (ammonia and nitrous oxide). Artificial fertilisers containing nitrogen are also a source of pollution during both the production process and when over-used on farm land.

…Thousands of building projects were put on hold, threatening housing targets, the speed limit on all roads was reduced to 100 kph during the day and plans were drawn up to slash the size of the intensive farming sector. Some officials even suggested to reduce the amount of protein in animal feed so that manure would be less polluting or giving livestock feed containing an enzyme which reduces the amount of nitrogen they produce.

The New Zealand government has a detailed report on Holland’s war on food production (excerpt):

Earlier in June, the Dutch government presented its long-awaited plan to tackle the country’s ‘nitrogen crisis’. The bold plan zeroes in on the Netherlands’ agriculture industry, calling for scaled emissions reduction across the country, including up to 95 percent reductions near vulnerable natural areas. The Minister of Nature and Nitrogen Policy expects about a third of the 50,000 Dutch farms to ‘disappear’ by 2030. Experts are calling it “the greatest overhaul of the Dutch agricultural sector in history.”

The buyout of farmers, especially in the vicinity of protected nature areas, is increasingly considered by the government as a way to meet its legally mandated nitrogen reduction targets in time. However, strong pushback from farmers’ interest groups and others will test the future of the plans.

…With the agricultural sector accounting for 45 percent of nitrogen emissions, the sector is under pressure to make significant changes in order to reduce emissions. The government will draw on the 25 billion euro Nitrogen Fund to help farmers (voluntarily) quit, relocate or downsize their business and make them more nature-friendly. The Minister of Nature and Nitrogen Policy says she is expecting about one third of the Netherlands’ 50,000 farms to disappear as a result of the plans.

The compensation plans include the following:

Dairy farmers that want to be bought out need to reduce their cattle stocks by 95 percent and permanently relinquish their right to increase stocks in future. For pig, chicken, and turkey farms, this percentage is 80 percent.

A separate arrangement for provincial governments seeking to buy out farmers close to sensitive Natura 2000 areas will be in play. For this arrangement, an additional 250 million euros will be provided.