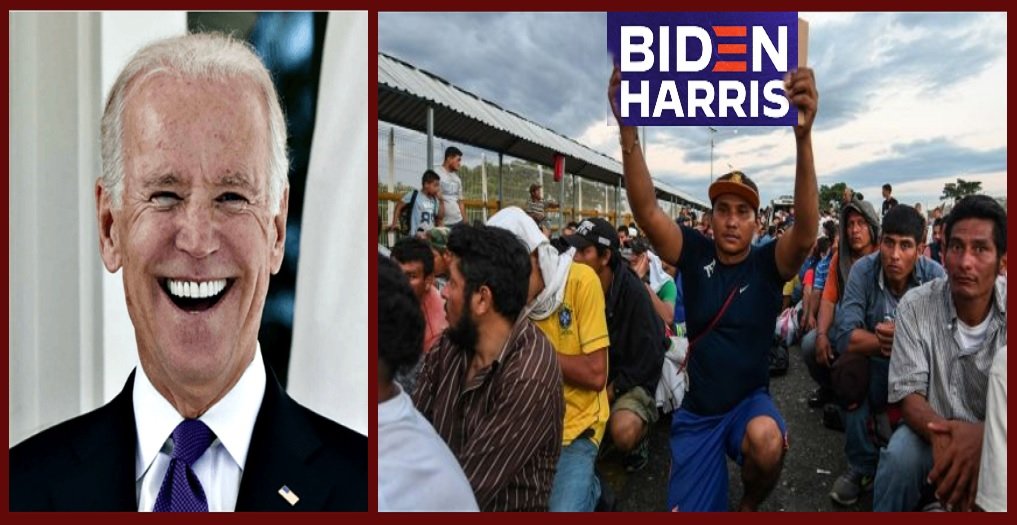 Since Biden took office in January 2021, an unprecedented number of illegal aliens have swarmed the Southern Border and given entry into the United States. The floodgates have been open for over a year now, allowing millions of foreign nationals – few of whom have been vetted in any way – to come into the country and take advantage of Biden’s taxpayer-funded migrant programs that are fueling this invasion.

Once the invaders arrive stateside, they are given aid, food, medicine, lodging, and even cash to spend as they please. Then they are loaded onto busses and planes by federal agents and contractors who secretly shuttle them across the country. Some illegals are even given cell phones as part of their welcome package.

As justification for this red carpet treatment the illegals are getting on behalf of the taxpayer, the Biden Regime has been promising that it is keeping tabs on these people and that they have been given the proper paperwork to appear in immigration court – because, if there’s one thing illegal aliens are notorious for, it’s following the law.

Well, now, Biden’s illegal invaders don’t need to worry about trivial things like ‘immigration status’ or ‘legal citizenship’ thanks to a Biden administration mandate that is on pace to “effectively pardon” as many as one million illegals by mid-2024.

This week, leaked documents that were uncovered by The Washington Examiner revealed that federal prosecutors are quietly and quickly dismissing tens of thousands of US immigration court cases against illegal aliens under the direction of the administration’s order to not prosecute illegal border crossings from before the 2020 election.

There are currently over 2 million backlogged immigration cases (a whopping 4x the number in 2016), most of which are presumably eligible for dismissal under the policy. Any case that gets thrown out will effectively shield the illegal immigrant from future federal deportation efforts. Only those who crossed the border before November 1st, 2020 will be held responsible for circumventing US immigration law – all other cases will likely be dropped completely.

“This is de-facto amnesty,” according to one Immigration and Customs Enforcement official who spoke with The Washington Examiner.

From The Washington Examiner:

“The Washington Examiner obtained leaked video recordings of virtual meetings that Kerry Doyle, ICE’s principal legal adviser, held with the more than 1,200 ICE prosecutors who bring cases against illegal immigrants nationwide, in which she explained in detail who should not be targeted for deportation. Illegal immigrants identified as national security and public safety threats, or those who had crossed the border illegally after Nov. 1, 2020, would be the only cases ICE would pursue. All others would be dropped.

As the memo explains — I think pretty clearly — we’ve put our thumb sort of heavily in favor of dismissal and durable solutions,” Doyle told her workforce in a private town hall meeting on April 14. “Even if you’ve spent a lot of time on the case, if it’s a nonpriority, you should be moving to offer [prosecutorial discretion] in that case…”

Unsurprisingly, the Biden Regime is sidestepping the traditional norms of American democracy to continue the destruction of the Southern Border. According to the ICE official, Biden’s radical Homeland Security Chief Alejandro Mayorkas, who is in charge of handling these cases, is pressuring prosecutors to drop the cases and flout US immigration law in the process.

“…Congress hasn’t passed it, but [Homeland Security Secretary Alejandro] Mayorkas’s chief lawyer at ICE is telling all prosecutors to dismiss cases. Once it’s dismissed, they’re not required to check in with you anymore,” said the ICE federal prosecutor who spoke with the Washington Examiner on the condition of anonymity.”

The backlog of immigration cases has been getting dismissed slowly since October of 2021, but the pace has really picked up as of late. In April, federal prosecutors were directed by the Biden administration to ramp up their efforts to dismiss cases, and, in the short time since, have cleared anywhere between 60,000 and 80,000 cases from the docket.

As of now, more than 97,000 of these cases have been completely dismissed already. If the pace continues at its current rate, over a million illegals will have been granted de-facto amnesty by early summer 2024 – which, as The Washington Examiner points out, is just in time for the next presidential election.

And that’s if the Biden regime doesn’t pick up the pace. With more illegals arriving by the day, they could easily clear the entire backlog to make room for the next couple million who are expected in the coming months.