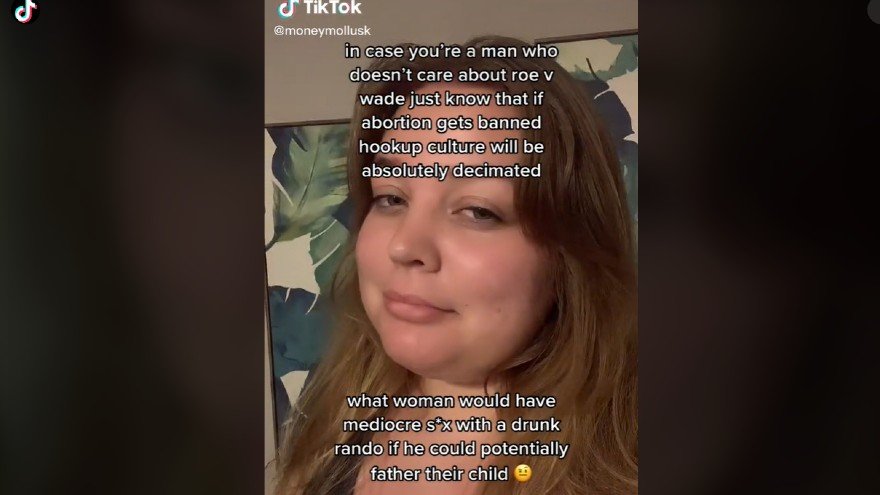 In the weeks leading up to the U.S. Supreme Court ruling on abortion, following the leaked draft in May, many women took to social media to let men know that if Roe were overturned, the habit of casual hookup sex would end.

“In case you’re a man who doesn’t care about roe v wade just know that if abortion gets banned hookup culture will be absolutely decimated,” TikTok user @moneymollusk wrote in a video, which has received more than 1.2 million views in a single day.

“What women would have mediocre sex with a drunk rando if he could potentially father their child,” she continued, noting that the video is directed at “all the pro-life men who love Plan B.”

The video now has more than 1.4 million view on TikTok.

But this is not the only woman to speak out, declaring the habit of casual or even drunk sex would end if women no longer have access to abort an unwanted child.

some men might not care about my literal rights but I know they care abt their bank account! #roevwade #abortionisessentialhealthcare #mybodymychoice

“Since about 75% of men only care about sex and money I hope they know that this roe v wade decision could destroy hookup culture and leave them paying 18 years of child support,” she wrote.

She went on to imply that men may not care about women’s rights, but she said they “care about their bank accounts.”

Meanwhile, TikToker @rae1iz drew more than 101,000 views after posting a video in which she said that hookup culture is set to “disintegrate.”

This is a joke, I’m using humor to cope with how terrifying this is 🥲 #fyp #ShowYourJOWO #FORDfortheBuilders #LIKEABOMBSHELL #roevwade #abortionisessentialhealthcare

“Why would we risk letting someone who runs on hot pockets and juul pods father our children?” she wrote, while noting in the caption that her video is “a joke” to “cope with how terrifying this is.”

In another TikTok video, user Holy Chloi said, “Men who aren’t speaking up on Roe V Wade, you know this is the end of hookup culture.”

Another user, mi.randa814 said in her video, “Wait till women ban sex. No abortion? No Chance Kyle.” In her video, she seemed to direct the comment at someone specific.

Say goodbye to hookup culture. We can take shit away too. #rowvwade #womenpower #staysafe

Yeeyeegirl99 posted her video to TikTok, saying, “Oh y’all boys don’t care because Roe V Wade dosn’t affect you? What do you think is gonna happen to all this hookup culture y’all so fond of?”

It continued with user livpoling who said in her video, “this is officially the end of hookup culture as we know it. Lemme see you fight back my nicotine addicted frat bros.”

♬ can I talk my shhh again – Luke

The social practice of casual sex is nothing new, but many women seem to have assumed a lower risk with easy access to abortion. They have not had many barriers to simply killing an unwanted child, should they become pregnant.

Women have turned the issue of abortion into a weaponized topic, as those who hold little value on life fear they may have more responsibility after Friday’s ruling.