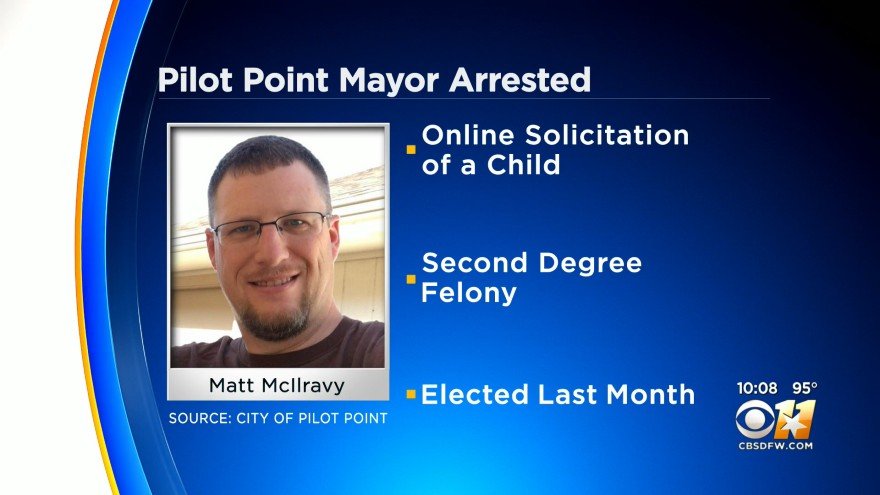 Texas Mayor Resigns After Soliciting Sex From Teen Under 14 Online

This week, the Mayor of a Texas suburb was arrested after being accused of trying to lure a teen for sex.

According to the Dallas Morning News, Pilot Point Mayor Matthew McIlravy, 42, was charged last week with online solicitation of a minor under the age of 14. A local police sting operation exposed McIllravy’s actions, which reportedly include more than one incident.

McIlravy, a married father of two boys and active member of his church, was arrested Tuesday following a five-month undercover operation by Dallas police, the outlet reported.

The Mayor took office back in May and now stands accused of trying to meet up and engage in sex acts with a girl he thought was 13 years old, according to an arrest warrant affidavit obtained by KTVT. He submitted his resignation Thursday ahead of a City Council meeting.

“To the Pilot Point City Council and City Manager, I am resigning as mayor of Pilot Point effective immediately,” McIlravy wrote in his resignation letter, WFAA reported.

McIlravy began a three-year term in May to head the Denton County town of roughly 4,000 residents, according to its website. The City has since removed his biography from the site.

#Breaking Sources tell me the mayor of Pilot Point in Denton County has been arrested for online solicitation of a child, a second degree felony. Matt McIlravy was apprehended as a result of an a Dallas Police undercover operation. He was elected in May. He is also a teacher pic.twitter.com/HegbwRvRVq

“The City’s government is designed to be flexible and resilient,” Pilot Point City Manager Britt Lusk wrote in an email. “The City will follow applicable state law and the City’s charter to fill any vacancies. In the absence of the Mayor, the City’s charter provides that the Mayor Pro-Tem presides over meetings.”

The post Texas Mayor Resigns After Soliciting Sex From Teen Under 14 Online appeared first on The Gateway Pundit.