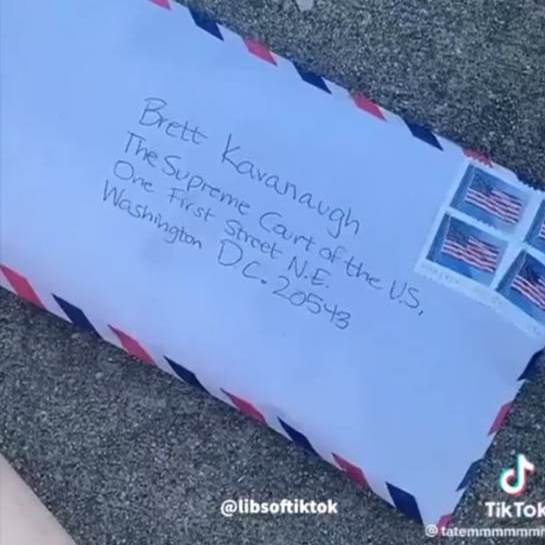 A young woman upset over the recent Supreme Court ruling returning abortion decisions to the states posted a video to TikTok claiming she mailed her period blood to Supreme Court Justice Brett Kavanaugh. The video was reposted by Libs of TikTok. The woman opens the video saying, “You know what’s funny? Is you all thought I was kidding.” She shows a statement that says, “Is this a “life” you’re saving?” on a yellow sticky note affixed to a plastic bag containing the alleged period blood that is stuffed into a letter-sized envelope with four stamps on it addressed to Kavanaugh using the Supreme Court’s street address in Washington, D.C. and is dropped in a mailbox that has graffiti on it. The video has interspersed clips of the message “FU…USA.” The brief video ends with the woman saying, “I’m a f***ing patriot.”

This woman mailed her period blood to the Supreme Court to protest the overturning of #RoeVWade pic.twitter.com/Km9z3YnDt6 The woman posted a follow up video encouraging others to mail their period blood to the Supreme Court:

“I just feel like the way that we’ve protested in the past has not worked very well. Now, I’m not advocating for burning down buildings. I’m not not advocating for it. But trauma and destruction’s kinda the thing that I love. So, um, if you guys wanna join me in mailing blood from your uterus to the Supreme Court, I already took the f***ing bullet and did it first, so you know, let’s do it! C’mon! You guys don’t want to keep that s*** in your house! Just mail it! It’s going in the trash anyway.”

“I’m not not advocating for burning down buildings. Trauma and destruction is kind of the thing that I love” pic.twitter.com/2mD879ADbd

There’s a good chance the woman has committed several criminal offenses regarding the mail and targeting a Supreme Court justice with bodily fluids, but with the Biden Justice Department in charge odds are slim she’ll be investigated let alone charged.

UPDATE: The poster of the videos says she has limited comments on them at TikTok and posted that she was blocked on Twitter by Libs of TikTok, “Aw a crazy liberal woman scares you? @libsoftiktok. Talk shit all you want but don’t hide like a little bitch…I’m limiting comments on TikTok to avoid having other women, in my comments who support me, Be harassed on my page because that has started happening. @libsoftiktok you should really actually tag me next time tho thx”

The woman, Tate Morgan, says in her Twitter about she is a comedian and “Most of what I say is satire.” She has not said on Twitter that the period blood video is satire.

And because posting TMI is so common these days, Morgan informed the world a month ago of the start of her period, which should help investigators tie the recant mailing to her current cycle.

Just started my period on a fucking airplane FML