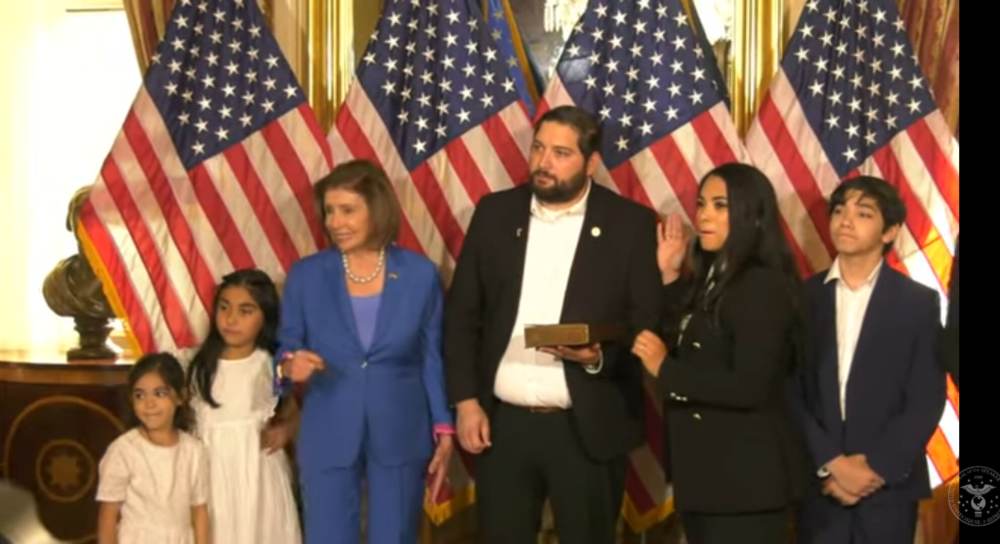 Rep. Mayra Flores has called out House Speaker Nancy Pelosi for pushing her daughter during a photo op at her swearing in ceremony last week.

“I am so proud of my strong, beautiful daughter for not allowing this to faze her. She continued to smile and pose for the picture like a Queen,” the recently elected congresswoman tweeted, quoting a video of the incident that was posted by James Woods. “No child should be pushed to the side for a photo op. PERIOD!!”

I am so proud of my strong, beautiful daughter for not allowing this to faze her. She continued to smile and pose for the picture like a Queen.

No child should be pushed to the side for a photo op. PERIOD!! https://t.co/TA50EntDoq

Woods had tweeted, “I love this princess stood her ground, while Nancy showed her true colors.”

Flores had been accompanied to her swearing in ceremony by her Border Patrol agent husband John and their four children, two boys and two girls.

The oldest girl was standing next to Pelosi as photographs were being taken.

Pelosi could be seen looking at the girl, before lightly elbowing her shoulder — signaling her to scoot over.

The little girl did move a step to the side, but moments later she looked down at the girl again and gave her a harder elbow and a shove.

The girl maintained her balance and again stepped to the side.

Speaker Pelosi has not yet commented or apologized.