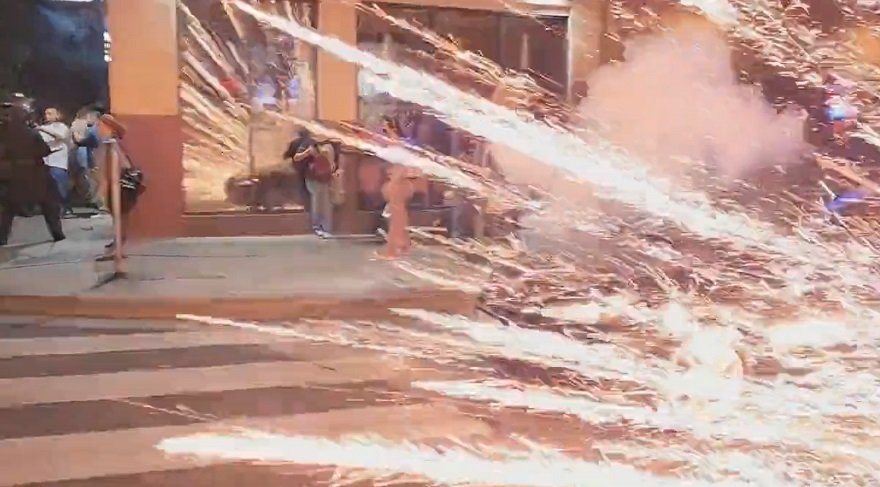 Chaos and mayhem took over in Los Angeles on Friday night as pro-abortion activists rioted over the Supreme Court’s decision to overturn Roe v. Wade and hand control of abortion laws back to the states.

Less-lethal munitions were used in an attempt disperse the crowd, but many of the protesters seemed determined to fight the police.

There were multiple protests across Los Angeles, including in Downtown and Hollywood.

Several officers were hit with “what appeared to be fireworks and projectiles,” according to a report from ABC 7.

Los Angeles is having clashes all night over the abortion decision pic.twitter.com/XiN7lI0nlj

Earlier in the evening, around 6 p.m., protesters blocked the northbound side of the in 110 Freeway at Fifth Street. “One man was seen prodding a large rod at a passing car,” the CBS report stated. The busy intersection of Highland Avenue and Hollywood Boulevard in Hollywood was also blocked by the activists.

a couple hundred lining the corners of #Hollywood & Highland. pic.twitter.com/5VJh5kLjZA

While the Hollywood protest appeared to be cleared relatively early, police issued an unlawful assembly and dispersal order for the gathering downtown.

A DISPERSAL ORDER was issued in the area of 4th Street and Main Street. Stay away from area. Continue to monitor for updates.

The Los Angeles Police Department warned people to stay out of the entire downtown area.

“STATE OF THE CITY: In the downtown area, officers are currently dealing with small crowds. Continue to stay away from the downtown area and monitor for updates,” the LAPD HQ account tweeted.

The LAPD said in a statement that they are “working closely with federal, state and local partners to access, assess and identify any potential threats related to this group and any other groups that may attempt to harm the public.”

The situation in Los Angeles remains ongoing. The Gateway Pundit will be continuing to cover the protests and riots throughout the weekend.

The post Chaos in Los Angeles as Violent Leftists Riot Over Roe v. Wade Being Overturned (VIDEOS) appeared first on The Gateway Pundit.