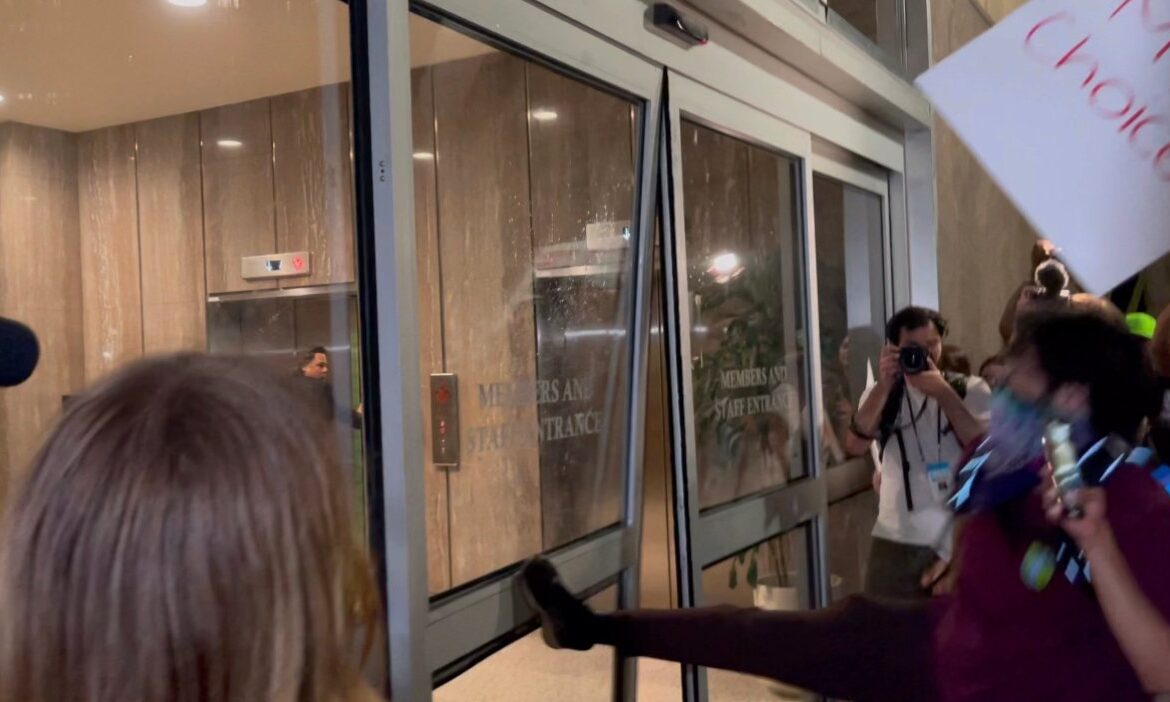 As a result of the new decision, Arizona will now enforce pre-Roe abortion laws, which will ban most of these procedures.

The violent mob on Friday against this decision was organized by Planned Parenthood Action Arizona and Radical Women Phoenix. Planned Parenthood tweeted a graphic encouraging activists to “get in good trouble” before the demonstration started. This all happened while Arizona State Senators were in the building conducting official business. The Gateway Pundit reported that Arizona Senators were evacuated from a vote last night when the left-wing mob became violent.

The Gateway Pundit has obtained exclusive footage from inside the riot, revealing exactly what happened.

After rallying across the street, the violent mob formed a massive crowd in front of the Senate building. Thousands of rioters began punching, kicking, and breaching the Arizona Senate doors. One masked thug managed to kick the doors open, endangering all inside of the building. Shortly after the violence began, Arizona State Police Officers came out in full riot gear scattering the mob at first. However, rioters continued their uncontrollable behavior, taunting officers, even as the officers geared up with gas masks.

Within minutes, tear gas was fired into the mob and the entire area was cleared. Police continued to sweep the area and fire tear gas rounds at the remaining insurrectionists.

It is unclear if anybody was arrested.

Arizona Gubernatorial candidate Kari Lake tweeted a video from inside the Senate building calling this what it is, a “REAL insurrection.” “This is domestic terrorism,” tweeted Lake.

The left is showing everyone what a REAL “Insurrection” looks like right now in Downtown Phoenix.

This is domestic terrorism. The Arizona national guard should have been deployed hours ago, @DougDucey

Arrest these animals immediately. They are out for blood. pic.twitter.com/RI8uNrioVz

The Fake News Media will be quick to cover this riot unfairly and claim it was actually a peaceful protest.

Planned Parenthood should be investigated for inciting a riot at the Arizona Capitol and these domestic terrorists need to be punished!