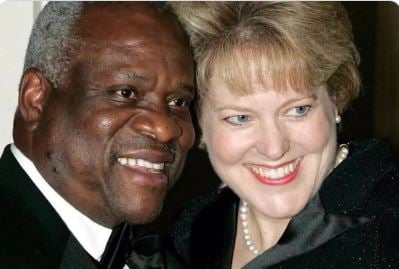 Whoever, with the intent of interfering with, obstructing, or impeding the administration of justice, or with the intent of influencing any judge, juror, witness, or court officer, in the discharge of his duty, pickets or parades in or near a building housing a court of the United States, or in or near a building or residence occupied or used by such judge, juror, witness, or court officer, or with such intent uses any sound-truck or similar device or resorts to any other demonstration in or near any such building or residence, shall be fined under this title or imprisoned not more than one year, or both.

Nothing in this section shall interfere with or prevent the exercise by any court of the United States of its power to punish for contempt.

Unhinged leftists have been protesting outside the home of several conservative Supreme Court Justices for the past month since news broke that Roe v. Wade would be overturned.

This is strictly forbidden by the US Constitution.

Attorney General Merrick Garland ignored the US Constitution, broke the law, and allowed unhinged leftists to threaten conservative justices at their home.

What will Joe Biden do? What will AG Garland do?

Enraged? Devastated? Pissed the fuck off? So are we.

Meet us at 5711 Burke Centre Pkwy. 6:30 PM we meet, 7 PM we carpool to the Thomas’s street. WEAR A MASK. @downrightimp @ShutDown_DC @RuthSentUs pic.twitter.com/oiDqNmJt9u

Hey Alito, fuck you, we know you would have burned witches a couple of centuries ago #bansoffourbodies #abortscotus pic.twitter.com/6hwSJl2sbD