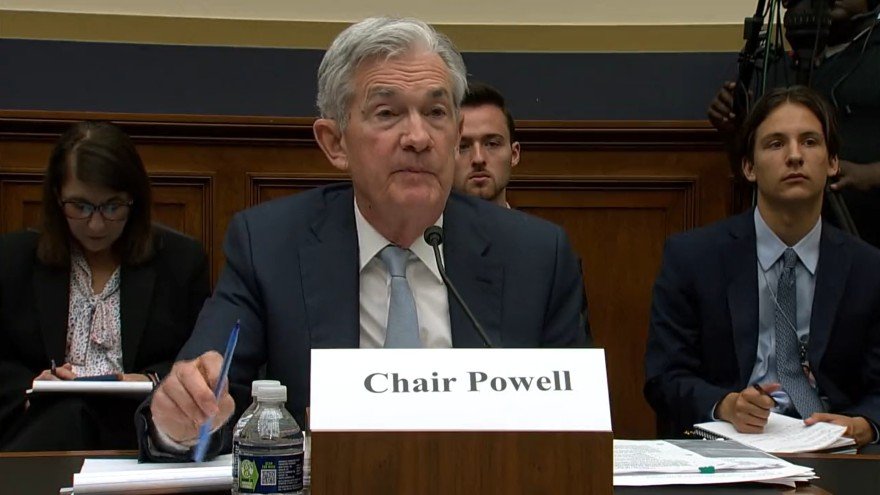 On Thursday, Federal Reserve Chairman Jerome Powell said that U.S. government debt is on an “unsustainable path,” warning that a recession is possible as inflation soars and the U.S. economy is shrinking.

Powell’s remarks were part of his testimony before the House Financial Services Committee during the second day of appearances on Capitol Hill.

“The U.S. is on an unsustainable fiscal path, meaning the debt is growing faster than the economy,” said Powell. “By definition, that is unsustainable.”

Powell says US is on a “unsustainable fiscal path” meaning the debt is growing faster than the economy. “There will reach a point at which it becomes a problem in servicing the debt. We’re not at that point. We’re not close to that point.”

Powell did note that currently, the country was not struggling to service its debt and that there was no looming threat of default. However, he said that eventually, government debt must fall behind its economic growth.

He said the U.S. needed “to get back where revenues and spending are better aligned.” He was clear that the nation must “have the economy growing faster than the debt over a longer time.”

Powell’s testimony on the Hill this week was focused on the issue of inflation. The U.S has seen a record-setting increase in the cost of all goods, services, and living expenses. Inflation has soared to a 41-year high. In May, the consumer price index jumped 8.6% from a year ago, the fastest rate since 1981.

Fed Chair Jerome Powell on inflation: “We did underestimate it. […] Looking at the supply chain problems and the shock to labor-force participation […] We had to decide whether that was going to be a lasting thing or whether it would turn around quickly.” pic.twitter.com/Ag7unuxTlm

Powell owned up to the Fed’s failure to properly assess the impact of inflation and admitted that it was not a transitory issue for the country.

“We did underestimate it. With the benefit of hindsight, clearly we did,” Powell said.

Earlier in the week, Powell was asked if he felt inflation was a direct result of Russia’s invasion of Ukraine. The White House has continued to claim that the “number one factor driving inflation is Putin’s war in Ukraine.”

Powell’s response was clear: “Inflation was high before, certainly before the war in Ukraine broke out.”

To be sure, the rate of inflation during Biden’s first year in office, well before the war in Ukraine, had risen from 1.4% to 7%, and in 2022 alone, it has risen another 1.6%. The rate of increase since the war began is far less than the increase in 2021.

Powell alluded to Biden’s $1.9 trillion stimulus package as a driving force behind the record rates of inflation that have consistently punished Americans.

The post Fed Chair Jerome Powell Says Government Debt Is On An ‘Unsustainable Path’ As Economy Is Shrinking appeared first on The Gateway Pundit.