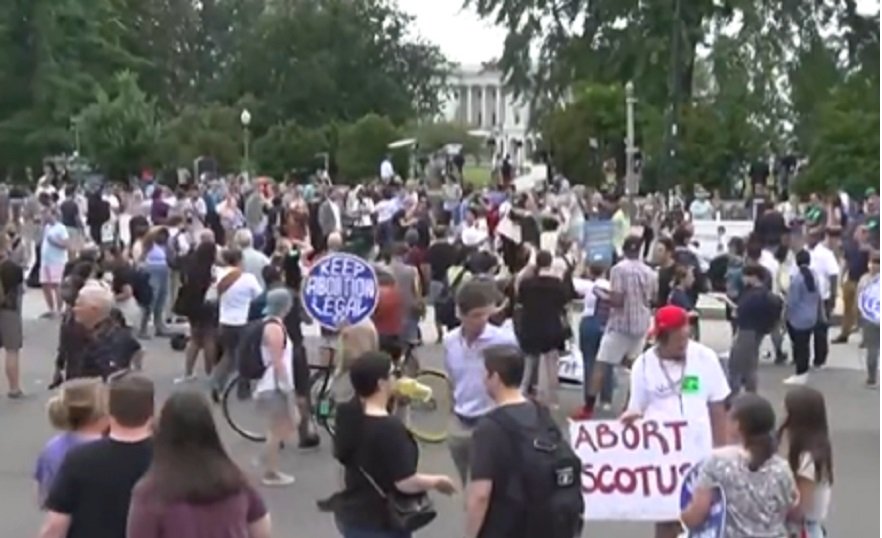 Pro-abortion activists were filmed handing out the home address of Justice Clarence Thomas to outraged protesters outside the Supreme Court.

The protesters were carrying signs with messages such as “ABORT SCOTUS.”

Justice Brett Kavanaugh already had a foiled assassination attempt at his home after abortion activists posted all of the conservative justice’s addresses online.

There have also been roughly two dozen attacks on pro-life pregnancy centers since the original draft opinion leaked to Politico in May, including arson attacks.

Pro-abortion group Ruth Sent Us, who originally doxed the justices and called for protests at their homes has called for a protest at the home of Justice Thomas on the evening the opinion was announced.

They instructed their followers to meet at the train station near his home to carpool at 7 p.m. on Friday.

Justice Clarence Thomas wrote in a concurring opinion regarding Roe v. Wade that it is time to reiterate his view that the due process clause does not protect a right to an abortion. He also stated that the court  “should reconsider” previous rulings from SCOTUS codifying rights to contraception access, same-sex relationships and same-sex marriage.

Former President Barack Obama and multiple other Democrat politicians have called for protests in response.

The post Abortion Activists Hand Out the HOME ADDRESS of Justice Clarence Thomas to Protesters Outside Supreme Court (VIDEO) appeared first on The Gateway Pundit.