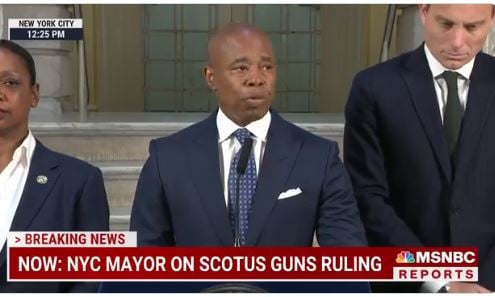 The Supreme Court released its ruling on Thursday against New York’s law that includes strict rules for concealed carry in the state.  Prior to this ruling, the state could decide who it wanted to have this right and who it didn’t.  The Gateway Pundit reported on this case moments ago:

New York requires its residents to obtain a license for lawful possession of a firearm, regardless of whether they plan to keep it at home or take it outside. To obtain a license, a licensing officer must determine whether the applicant is of good moral character, lacks a history of crime or mental illness, and that “no good cause exists for the denial of the license.”

Applicants must also have “proper cause” to lawfully conceal carry a handgun—openly carrying a handgun is entirely banned. New York law leaves “proper cause” undefined, but courts have clarified that this standard means one must “demonstrate a special need for self-protection distinguishable from that of the general community or of persons engaged in the same profession.”

Merely having the “generalized desire” to conceal carry, according to the courts, “does not constitute ‘proper cause.’”

The Supreme Court disagrees with New York law and just ruled on this case this morning.

Today, the Supreme Court decided its Second Amendment case, striking down New York’s strict concealed carry law & establishing the right of law-abiding Americans to carry a loaded gun in public w/out any showing of special need.

The justices’ 6-3 decision is expected to ultimately allow more people to legally carry guns on the streets of the nation’s largest cities – including New York, Los Angeles and Boston – and elsewhere. About a quarter of the U.S. population lives in states expected to be affected by the ruling, the high court’s first major gun decision in more than a decade.

The ruling comes as Congress is actively working on gun legislation following recent mass shootings in Texas,New York and California.

Justice Clarence Thomas wrote for the majority that the Constitution protects “an individual’s right to carry a handgun for self-defense outside the home.”

In their decision, the justices struck down a New York law requiring people to demonstrate a particular need for carrying a gun in order to get a license to carry one in public. The justices said the requirement violates the Second Amendment right to “keep and bear arms.”

Tyrannical and lawless New York City Mayor Eric Adams made an announcement following the release of the ruling.

Adams told New Yorkers, “Nothing changes today… It ignores the presence (sp) and it endangers our future.”

This is complete lawlessness. It’s not how things are supposed to work, Eric.