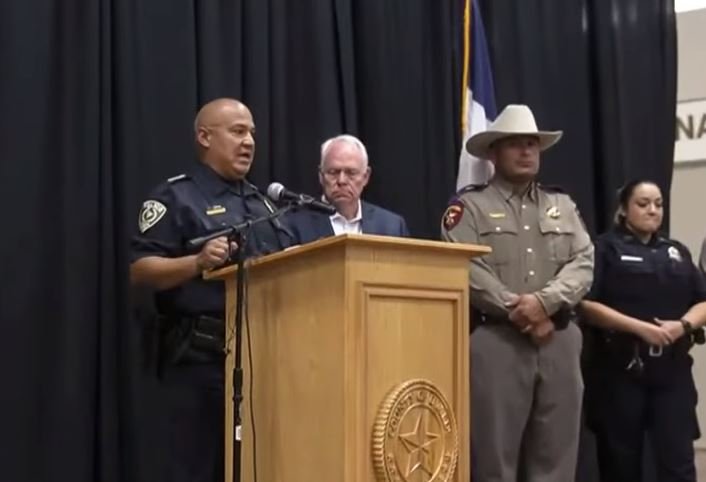 “The embattled police chief of the Texas school district where 19 children and two teachers were killed in a school shooting has been placed on administrative leave, the superintendent announced.” – ABC News reported.

Hal Harrell, superintendent of Uvalde CISD said Arredondo was placed on leave due to “lack of clarity that remains” in the probe into the police response to the deadly mass shooting at Robb Elementary School last month.

A few weeks ago it was reported the Uvalde Police Department and Uvalde School District were no longer cooperating with the Texas Department of Public Safety’s investigation into last month’s deadly mass shooting.

According to multiple reports, the shooter, Salvador Ramos, spent more than 40 minutes inside as loved ones and onlookers begged the police to charge into the building.

Police arrived 4 minutes after the shooting began, but Ramos continued on with his killing spree virtually uninterrupted.

A report by the Austin American-Statesman shows Uvalde police were in the hallway of Robb Elementary School with rifles and at least one ballistic shield within ten minutes of the start of the mass shooting by Salvador Ramos.

Security video screen image from 11:52 a.m. CDT shows at least five officers, two with rifles including one with a shield.

On Tuesday, Texas of Department of Public Safety Director Steve McCraw admitted that the Uvalde Police and on-scene officers *NEVER* touched the door to see if it was locked UNTIL they breached!!

“We can never see anybody put their hand on the door of course up until the breached.”

Uvalde Police and on scene officers *NEVER* touched the door to see if it was locked UNTIL they breached!! pic.twitter.com/reTDzcH1Cc