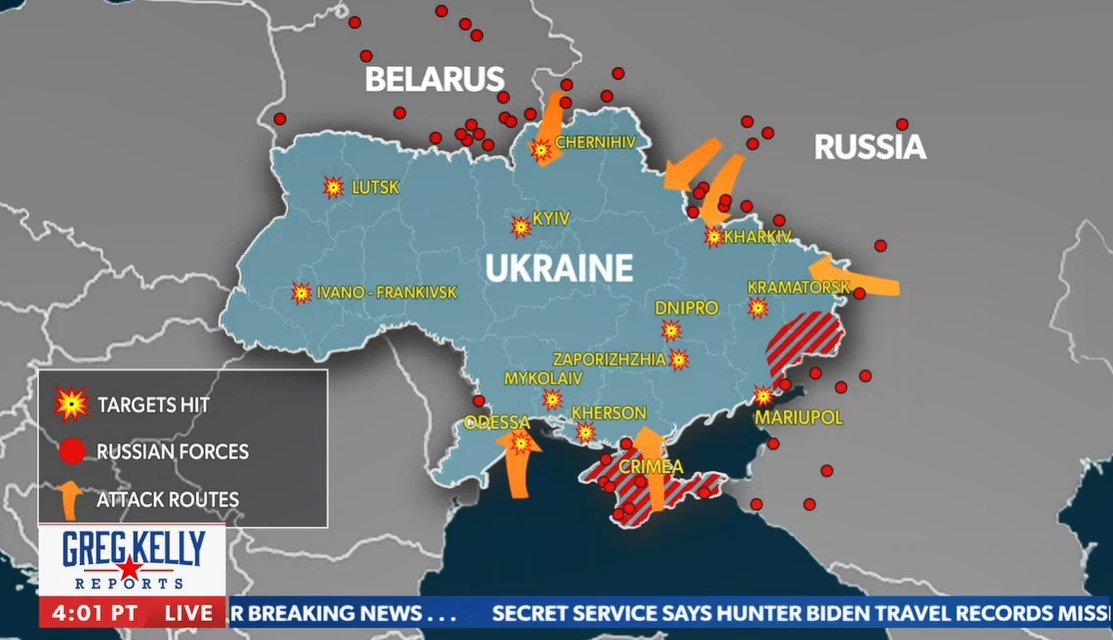 Will Russia Shift to a War Strategy? Two events in the last few days–Lithuania’s decision to prevent the transit of Russian supplies for Kalinigrad and the Ukrainian missile attack on a Russian oil platform in the Black Sea–may be the tipping point for Russia in shifting to a War strategy rather than continue with the Special Military Operation. Let me explain.

The Special Military Operation, besides the stated goals of demilitarizing and denazifying Ukraine, consisted of restricted rules of engagement. Russia did not destroy all communication infrastructure and networks. The internet remained operational in most parts of Ukraine. Cell phone towers and power grids were not targeted and destroyed. The lights stayed on in the cities and towns, including Lviv and Kiev. Civilian fuel depots and oil refinery plants were left largely unmolested.

Ukrainian government buildings, including the Ministry of Defense, have not been reduced to rubble. They still stand and daily business continues. The civilian transportation grid is still operating. Some rail travel has been disrupted in order to stop the movement of NATO military supplies to the eastern part of Ukraine, but trains continue to roll, albeit diesel fueled beasts.

Notwithstanding western propaganda that Russian “orcs” are raping, pillaging and wantonly killing civilians, the truth is otherwise. Russia has not targeted purely civilian areas (unlike Ukraine, which is shelling the city of Donetsk where there is no Russian military activity) and has pressed Ukraine to open safe escape routes for civilians caught in a combat zone. Ukraine has blocked many of these relief efforts.

The defining feature of the Special Military Operation is the size of the Russian military force deployed to Ukraine–only an estimated 250,000 Russian troops going up against a Ukrainian army and territorial defense force of 600,000. Conventional wisdom among military strategists is that an attacking army should have a 3 to 1 advantage if it hopes to succeed:

The 3-1 rule of land combat is a military aphorism rooted in operations research that states that an attacking force should have a 3 to 1 advantage over a defending force in order to succeed. The reason the attacking force must be so large of course, is to account for losses that can occur when assaulting a fortified position. A smaller attacking force often assumes much greater risk by not having enough soldiers to create and exploit a breach; likewise, choice of terrain, cover, level of preparedness, area denial, distance to resupply, distance to reinforcements, and home field advantage (morale) is usually on the side of the defender.

Russia turned the conventional wisdom on its head. Despite being outnumber almost three to one by Ukraine who was fighting a defensive battle from fortified positions, Russia quickly obtained air supremacy and crippled Ukraine’s ability to provide close air support to besieged units. Ukrainian fixed wing and rotary wing aircraft have not played a significant offensive role in the Ukrainian operations.

Russia also turned to the militias in the Luhansk and Donetsk Republics and let them carry the brunt of the battle in recapturing territory held by the Ukrainian army. It appears that Russia played the role of supporting commander while the military forces of Luhansk and Donetsk were the supported commanders. In other words, Russia provided artillery, armor, air support and missiles to back up the military operations of the Donbas republics. Russia also provided troop reinforcement as needed. Despite western claims that Russia has suffered catastrophic losses, there is no evidence on social media in Russia to back up that claim. Vladimir Putin does not have the power to prevent bereaved parents and spouses from mourning sons lost on the battlefield.

The carnage the Ukrainian forces are experiencing on the ground will pale in comparison if Russia decides to take the gloves off and conduct a full scale war on Ukraine. You will no longer see photo ops with western politicians and celebrities strolling the streets of Kiev. Russia can destroy Ukraine’s electrical network and shutdown the Zaporizhzhia Nuclear Power Plant–the largest plant in Europe. Russia can kill Ukraine’s access to oil and take out refineries. And Russia can begin targeting Ukraine’s government infrastructure.

I hope it does not come to this, but Vladimir Putin has made it clear that this is an existential fight for Russia and the west, by its words and actions, have reinforced that belief. One German journalist has awakened to the danger:

German TV is admitting what’s become increasingly obvious: the West is in denial that Russia has all but won its military conflict with Ukraine.

“I am afraid we are now faced with a situation where we now have to face an uncomfortable truth,” said journalist Wolfram Weimer last week. “And that is that Russia has won this war.”

“Now, our chancellor is working with this language template: ‘Russia must not win this war. Ukraine must win,’” Weimer continued.

“I’m just wondering where this is headed politically, because in fact Russia has practically conquered the Donbas in just a matter of a few days. The area gains are huge, they are about as big as Holland and Belgium put together. The land connection to Crimea is there. That means, how is Russia supposed to lose this war now?”

Weimer went on to say that Ukraine “does not have the strength” to militarily fight Russia despite receiving billions of dollars of weapons and assistance from the West, and that Russia is “also winning the international game of sanctions.”

We are living in historic times. The world that was created in the aftermath of World War II was extinguished on February 24, 2022. The United States is no longer in a position to dictate the outcome in Ukraine and Europe. That power now resides with Vladimir Putin.

The post Will Russia Shift to a War Strategy? appeared first on The Gateway Pundit.