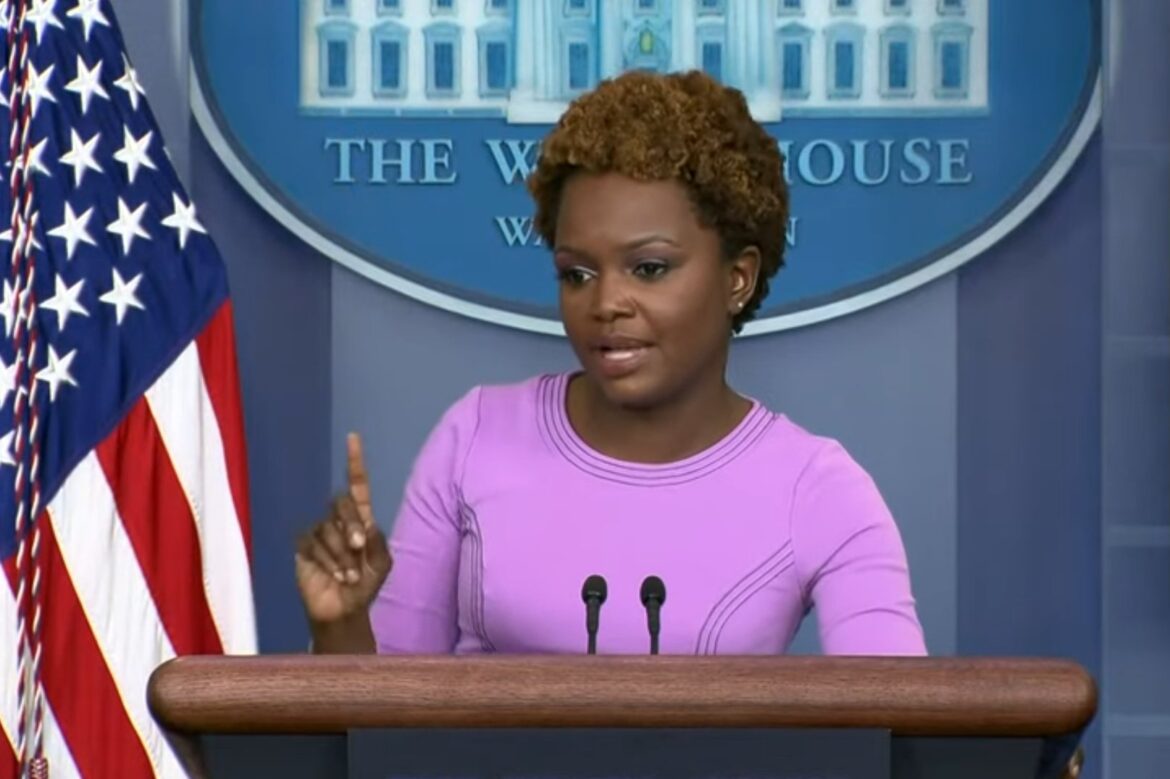 Recession? What Recession…: WH Press Secretary Claims the US is Now Entering a Period of “Stable and Steady Growth” – (VIDEO) You can’t make this up…

On Tuesday, White House Press Secretary Karine Jean-Pierre threw a wet blanket on fears of a looming recession hitting the United States, claiming that the situation is nowhere near as dire as it looks.

In fact, according to the official WH position, things are quite the opposite. Apparently, it’s all roses and rainbows as the US is poised to enter a period of “stable and steady growth,” Jean-Pierre predicted.

Pay no mind to the crumbling supply chain, ballooning gas prices, starving babies, rampant crime, and inflation hitting unprecedented levels – hell, even the “hedge” against the fiat financial system (Bitcoin) has tumbled by over 70%. Don’t worry though, the fraudulent Biden regime is trotting out the WH Press secretary to tell Americans ‘the sky isn’t falling.’

“Right now, we don’t see a recession. We are not in a recession right now.

Right now, we’re in a transition where we will go into a place of stable and steady growth, and that’s going to be our focus.”

In all likelihood, the planned recession is already upon us, but not according to the WH. They’re too busy boasting about the ‘booming’ US economy.

They said the same thing about inflation. pic.twitter.com/ISTc9HR1ZS

Unsurprisingly, this is the same last-ditch effort the Biden Regime made just a few months back about the skyrocketing inflation numbers, which have predictably gotten worse as this administration continues with the planned demolition of the US.

For months, Biden, his officials, and members of the fake news media all sang the same tune: ‘inflation us temporary’ if it even exists at all. And the same is now being said about the impending recession – but who knows, they could be right. We might just skip the whole recession thing and go straight to depression territory, with the way things are tracking now.

Here is a supercut of Democrats lying about the ‘transitory’ inflation that is a permanent and growing fixture of the America-last Biden Regime:

Here is two minutes of Democrats LYING about inflation pic.twitter.com/xd8uDqv5yK

The amount of deliberate misdirection and outright nonsense coming from our elected officials, so-called experts, and bootlicking media hacks has reached peak propaganda levels. The situation has gotten so bad that these clowns don’t even have to try to land in the same ballpark as reality anymore.

Even Stalin would be impressed.

The post Recession? What Recession…: WH Press Secretary Claims the US is Now Entering a Period of “Stable and Steady Growth” – (VIDEO) appeared first on The Gateway Pundit.