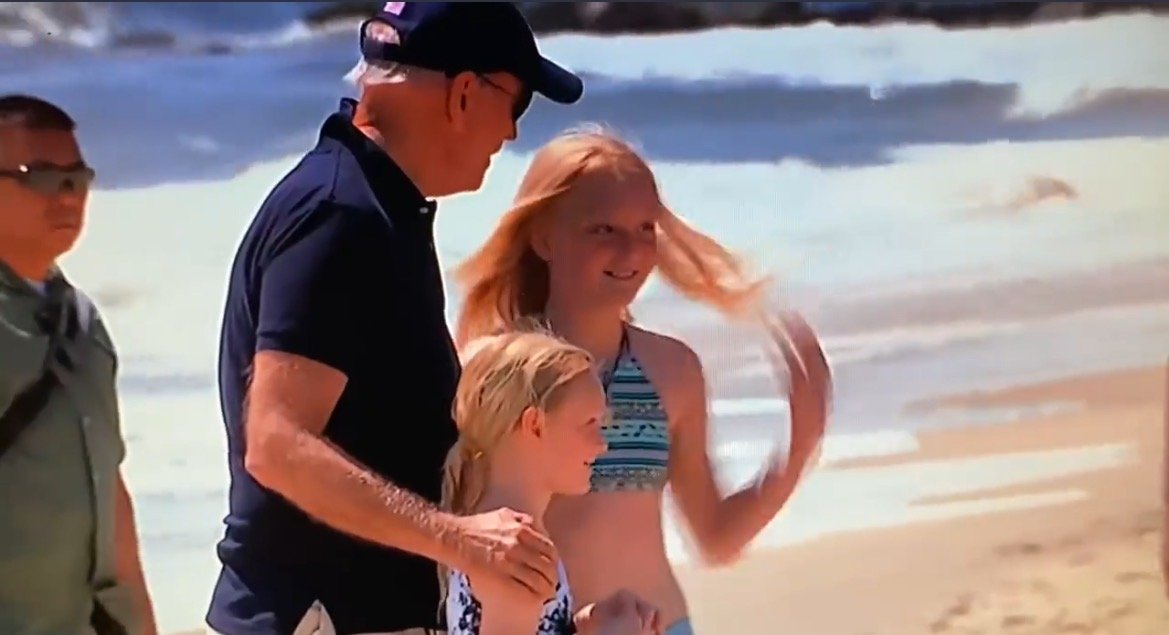 He just can’t help himself.

Joe Biden took a leisurely stroll with his daughter Ashley on Delaware’s Rehoboth Beach Monday as Americans suffer under his disastrous presidency.

Biden snapped at a reporter for daring to ask about the current/impending recession.

“The majority aren’t saying that. Don’t make things up! OK! Now you sound like a Republican politician — I’m joking! That was a joke, that was a joke,” Biden said.

Joe Biden also stopped to take photos with beach goers and used the opportunity to creep on little girls.

Biden took photos with young sisters before summoning another girl to come over for a photo.

The 79-year-old creep grabbed the pre-teen’s hand and pulled her close to him as the girl’s mother took a photo.

President Biden, daughter Ashley and members of his family walked Rehoboth Beach today and greeted members of the public. pic.twitter.com/8M0sFb2v42

Biden’s daughter Ashley joined Joe and Jill this weekend in Rehoboth Beach as the story of the First Daughter’s diary and “showers w/my dad” make the rounds.

Ashley Biden’s diary is authentic and the FBI previously raided Project Veritas for possible ‘theft’ of the journal belonging to Biden’s daughter.

Aimee Harris, 39 of Florida, found Ashley Biden’s diary at a halfway house in Palm Beach in 2020 and sold it to Project Veritas for $40,000.

In a January 2019 entry, Ashley Biden recalled how she used to shower with her father, Joe Biden, and suggested it may have contributed to a sex addiction. “I have always been boy crazy,’ Ashley wrote. ‘Hyper-sexualized @ a young age … I remember somewhat being sexualized with [a family member]; I remember having sex with friends @ a young age; showers w/ my dad (probably not appropriate).’ she wrote in a January 2019 entry, according to the Daily Mail.

Ashley Biden, now 41, has battled drug and alcohol addiction since she was very young.

Ashley Biden also struggled in her marriage and had affairs with other men.