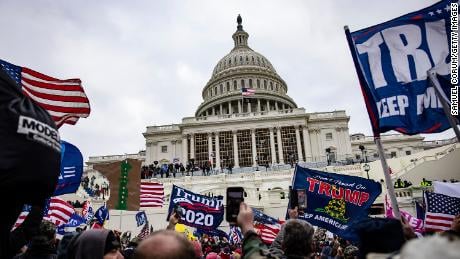 INSURRECTION: Colbert’s Staff Harassed GOP Lawmakers Inside US Capitol After It Closed — AND Also Mocked and Harassed Speakers at Rally for Families of J6 Defendants

On Thursday night several CBS employees who work for Colbert’s late-night show were arrested in the US Capitol, trespassing after hours, and HARASSING GOP lawmakers.

The US Capitol was closed at the time.

Rep. Adam Schiff (D-CA) let the insurrectionists in the building.

The group of leftist insurrectionists reportedly banged on doors of several Republican offices – including that of Minority Leader Kevin McCarthy of California, Jim Jordan of Ohio and Lauren Boebert of Colorado.

Shouldn’t these dangerous radicals be sitting in prison at this point? Or does it only work this way for Trump-supporters?

Tucker Carlson reported on this latest US Capitol break-in.

Apparently these men were not only harassing Republican lawmakers after hours but they also went and harassed and mocked the families of the January 6 prisoners held in prison for over a year without a trial.

Working on clip but here are photos of the slob who hides behind a puppet at the event as relatives talk about loved ones in solitary confinement for over a year. His presence is so disruptive that one organizer tries to shield his camera

They mocked the families and the J6 protester who committed suicide.

When I asked one of the “producers” of the @StephenAtHome Colbert team if they knew the presser they were interrupting and mocking was one focused on the abuse of political prisoners—including one who had taken his life—he said “we all gotta get paid.”

The post INSURRECTION: Colbert’s Staff Harassed GOP Lawmakers Inside US Capitol After It Closed — AND Also Mocked and Harassed Speakers at Rally for Families of J6 Defendants appeared first on The Gateway Pundit.