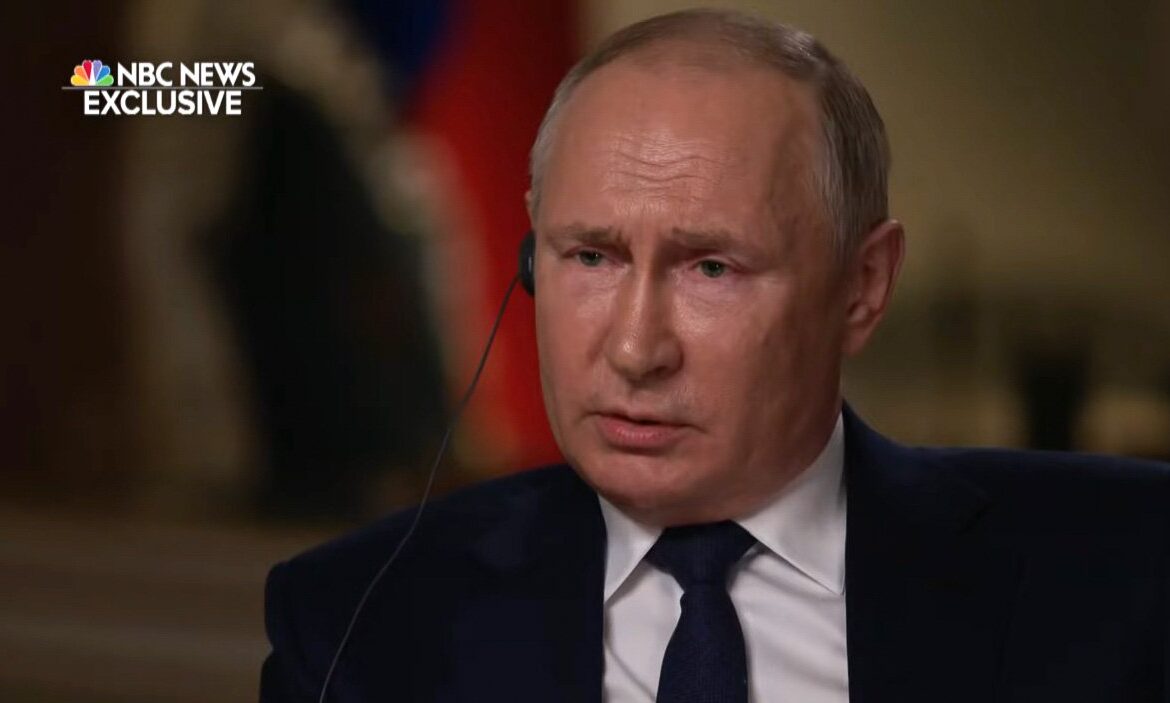 President Putin, Did You Know You Are Losing the War in Ukraine? I write with the greatest of respect and sorrow to inform you that your gamble in Ukraine has failed and you have lost a strategic battle. How do I know? Well, UK Admiral Tony Radakin, the head of the UK’s Armed Services says so. Here is what he said:

Admiral Sir Tony Radakin said Russia was suffering heavy losses, running out of troops and advanced missiles and would never be able to take over all of Ukraine.

“This is a dreadful mistake by Russia. Russia will never take control of Ukraine,” Tony Radakin told PA Media in an interview published on Friday.

The country’s highest-ranking military officer said the Russian president, Vladimir Putin, had lost 25% of Russia’s land power for only “tiny” gains and it would emerge a “more diminished power” while strengthening Nato. . . .

“The Russian machine is grinding away, and it’s gaining a couple of – two, three, five – kilometres every day,” the admiral said.

“President Putin has used about 25% of his army’s power to gain a tiny amount of territory and 50,000 people either dead or injured. Russia is failing.”

If Admiral Tony says it is true you can take it to the bank. I mean, who can deny the British victory at Dunkirk and their smashing successes in quelling the natives in India, Iraq and Afghanistan. Not to be presumptive Mr. Putin, but when Russia comes to grip with the mighty military prowess of the United Kingdom, I can understand why you will quiver in your snow boots.

Oh sure, just because you now control the areas of Ukraine that produce the bulk of its grain exports, does not mean that you can remain a big player in grain exports (notwithstanding the fact that your country is the 7th largest grain producer in the world). And ditto for your vast reserves of oil and gas. I hear that the Europeans are quite prepared to burn cow and sheep dung to stay warm rather than submit to the indignity of buying your gas and paying rubles.

And speaking of rubles, do you not realize that no one wants your ruble? Joe Biden told me that your ruble is rubble, so it must be true. Biden is known for his veracity. You are acting as if the ruble is stronger now than at the start of your special military operation. That is delusional sir.

And how do you hope to continue to produce new missiles and rockets and other munitions to replace the hundreds of thousands you have fired so far? You act as if Russia is a major manufacturing/industrial center that does not depend on foreign exports to sustain itself. Just because your country is the major exporter of critical minerals and metals that the United States and Europe need to make everything from catalytic converters to computer chips, does not give you the upper hand.

Do you not remember how the United States could no longer make the rocket engines required to carry astronauts to the International Space Station and found an outside provider? See, the west always has some dandy alternatives. You act as if Russia was building those rocket engines and we in the west know that cannot be true because, speaking frankly now sir, you Russians are a bunch of vodka soaked, illiterate peasants.

The fact that you require your students to take three times the number of courses in mathematics, physics, chemistry and biology is further proof of Russia lagging behind the west. See, we understand what is really important. First, small children need to understand there is no such thing as male and female. Once they understand that they do not have to waste their time learning about chromosomes. Men get pregnant and need tampons (though a shortage of those has cropped up). Second, we believe deeply in promoting racial division based on the pigment of someone’s skin. You crazy Russians operate under the delusion that national unity is something important. Not here. We have come to understand that we need to destroy our heritage and recreate something new, which includes recognizing there are at least 72 genders.

And why waste time teaching advanced math skills like calculus. We realize that keeping a majority of our black youths illiterate but capable of making change for a $100 dollar bill when they sell an ounce of crack or meth, is far more important then equipping them with skills that would allow them to live as free men and women. Our government knows what is best for them.

You claim to have a modern military, but you lack the legion of lobbyists working for defense firms that supply us with the know how to produce $600 toilet seats. That is a skill you Russians certainly lack. You do not give your Generals and Admirals the opportunity to whore themselves in the private sector and become rich selling useless weapon systems. If you would simply follow our system you would not have the problem with corruption that weakens Russia. Just look at Washington, DC and the surrounding suburbs in Maryland and Virginia. They are the wealthiest counties in the country and they do not actually manufacture anything.

And you should take no comfort in the fact that the U.S. military services are failing dramatically to attract new recruits. We have an excellent reserve force of proven killers. They inhabit our major cities and hone their firearm skills by regularly conducting ambushes and attacks. People worried about rising crime rates in the United States are just stupid. They value personal safety over being willing to sacrifice that safety so that our criminal gangs can engage in live fire operations in real urban centers. Can’t get better training than that. Just ask your Chechen lads who took out our Nazi friends in Mariupol.

Vlad–mind if I call you Vlad?–you need to face the facts that NATO is a military powerhouse. Yeah, I saw your Minister of Defense briefing today. In case you are too busy sobbing over your impending defeat, let me summarize the highlights:

High-precision air and ground weapons (https://t.me/mod_russia_en/2262) in the areas of Kremenchug and Lisichansk have destroyed technological facilities for oil refining and fuel storage intended to supply Ukrainian military equipment in Donbass. Russian air defence means have shot down 1 Ukrainian Su-25 aircraft near Kamyshevakha and 1 Mi-24 helicopter of the Ukrainian Air Force near Arkhangelsk in Donetsk People’s Republic.

High-precision air and ground weapons in the areas of Kremenchug and Lisichansk have destroyed technological facilities for oil refining and fuel storage intended to supply Ukrainian military equipment in Donbass.

Russian air defence means have shot down 1 Ukrainian Su-25 aircraft near Kamyshevakha and 1 Mi-24 helicopter of the Ukrainian Air Force near Arkhangelsk in Donetsk People’s Republic.

Also 8 Ukrainian unmanned aerial vehicles have been shot down near Borovenka in Lugansk People’s Republic, Chernobaivka in Kherson Region, Sukhaya Kamenka, Malaya Kamyshevakha, Zabavnoe in Kharkov Region, and Gulyaipole in Zaporozhye Region, including 1 Bayraktar-TB2 near Kherson.

The attacks have resulted in the elimination of more than 310 nationalists, 10 tanks and other armored fighting vehicles, 3 Grad multiple rocket launchers, 9 field artillery mounts and 14 special vehicles.

Vlad!! For the love of God. You have got to stop using all of your advanced missiles to destroy Ukrainian personnel and weapons. You are going to run out (aren’t you?). In any event, I hope this missive speaks to your heart and convinces you that all is lost and that Russia’s only option is to submit itself to western authorities. I understand that Admiral Rachel Levine is prepared to accept your surrender. 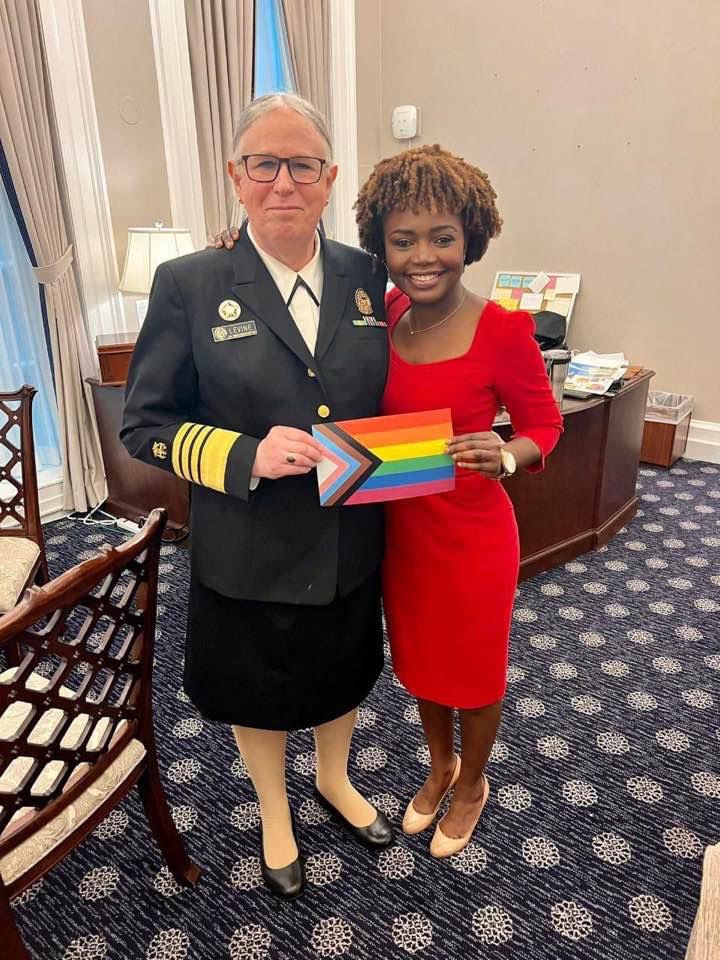 The post President Putin, Did You Know You Are Losing the War in Ukraine? appeared first on The Gateway Pundit.