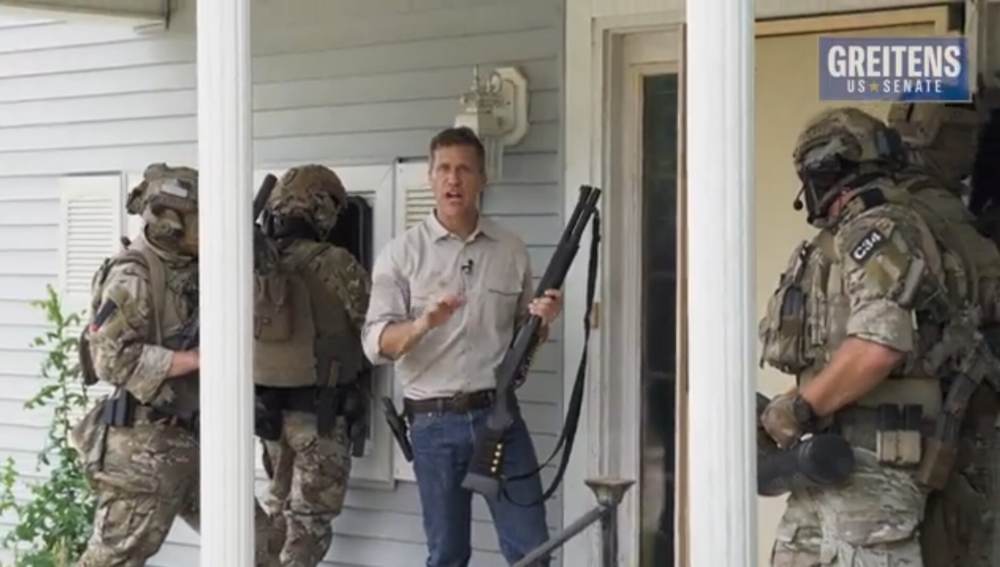 Republican primary U.S. Senate candidate for Missouri Eric Greitens released an ad on Monday showing the former Navy SEAL carrying a weapon and leading a group of armed soldiers  saying he is hunting RINOs (Republicans in name only.)

The video has gone viral since it was posted at 8:30 a.m. CDT with well over one million views on Twitter.

The Greitens campaign is encouraging supporters to become ‘RINO hunters.’ Facebook reportedly took down the ad. UPDATE: Twitter has chosen to leave the ad up but with a discalimer and limitations on sharing and commenting. “I’m Eric Greitens, Navy SEAL, and today we’re going RINO hunting. The RINO feeds on corruption and is marked by the stripes of cowardice. (Flash bang grenades explode as military team and Greitens enters home.)  Join the MAGA crew. Get a RINO hunting permit. There’s no bagging limit, no tagging limit and it doesn’t expire until we save our country.”

We are sick and tired of the Republicans in Name Only surrendering to Joe Biden & the radical Left.

Greitens responded to criticism from Rep. Eric Swalwell (D-CA) who commented, “Let’s place the blame for this violent ad where it belongs, at the doorsteps of Kevin McCarthy & Mitch McConnell. They’ve failed to confront & condemn the MAGA radicals of their party. Now it’s out of control & threatens everyone’s freedom.” Greitens mockingly replied, “Did Fang Fang write this?”

Did Fang Fang write this? https://t.co/auwNJLymUf

Greitens also celebrated the Washington Post reporting on his ad, “Thank you to @washingtonpost for hosting our video on their website!
Everybody can visit the link below to see our new ad!”

Thank you to @washingtonpost for hosting our video on their website!

Everybody can visit the link below to see our new ad!https://t.co/lQ4zRatxP7

Eric Greitens a member of the Navy Reserves has violated DOD policy by identifying himself as a “SEAL”  and using military uniforms without a disclaimer.

Contact the Naval Inspector General Hotline at NAVIGHotlines@navy.mil or (800)522-3451 and report this abuse. https://t.co/hSZB6VIqLa

VoteVets is one of many calling on federal law enforcement agencies to investigate Greitens over the ad.

CNN’s Donie O’Sullivan reported Facebook took down the ad, “Facebook has removed the Eric Greitens video: Meta spokesperson: “We removed this video for violating our policies prohibiting violence and incitement.””

Meta spokesperson: “We removed this video for violating our policies prohibiting violence and incitement.”